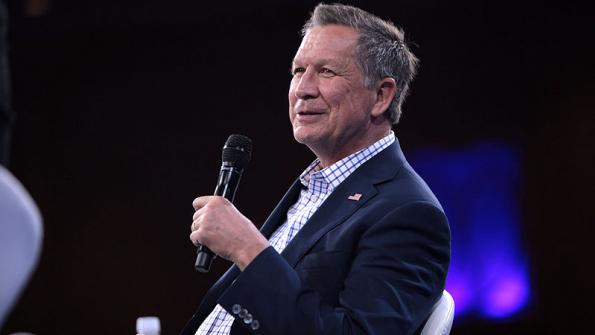 Ohio governor: all public roads to be open for autonomous vehicle testing

Ohio Governor John Kasich signed an executive order on May 9 that allows autonomous vehicles to be tested on any public Ohio road.

Ohio Governor John Kasich signed an executive order on May 9 that allows autonomous vehicles (AVs) to be tested on any public Ohio road.

To participate, AV companies would have to register with the state’s DriveOhio program, a state office Kasich created in January, according to Ohio radio station WXVU. DriveOhio’s purpose is to coordinate multiple state agencies into a “one-stop shop” for AV or connected vehicle developers.

The safety requirements for participation include requiring company employees with valid licenses to operate an AV from behind the wheel and be able to take control of the vehicle if needed, Cleveland.com reports. Vehicles must also meet certain safety standards and comply with Ohio traffic laws. Under the executive order, Kasich can suspend any project that doesn’t comply with the requirements.

“We’re not going to permit, by the way – at least as long as I’m here – communities to start blocking this, because then you create a hodge-podge, that is unworkable,” Kasich said, according to WXVU.

DriveOhio was the result of a plan Kasich asked state officials to create to attract AV companies to Ohio, Cleveland.com reports. The plan grew out of Kasich’s self-described envy towards other governments signing deals with AV companies. He hopes to establish Ohio as a hub of smart vehicle research, the AP reports.

Ohio's capital, Columbus, had previously won a $50 million grant from the 2016 Smart Cities Challenge, according to the Columbus Dispatch. The grant is aimed towards encouraging more vehicle innovation research and increasing transportation opportunities.

Kasich also has a personal tie to the matter as well: his parents were killed in a drunk driving accident, according to Cleveland.com. Kasich has previously pitched AVs as a way to reduce traffic accidents and fatalities, the Dispatch reports.

Ohio Department of Public Safety Director John Born concurs: “Technology is not a key — it is the key in (reducing) traffic fatalities,” Born said, per the Dispatch.