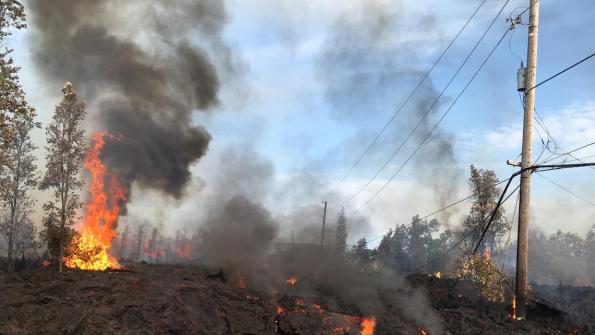 As destruction from Kilauea's continued eruption continues to unfold, Hawaii County officials ordered evacuations with the Hawaii National Guard assisting in the evacuations.

As destruction from Kilauea's continued eruption continues to unfold, Hawaii County officials ordered evacuations with the Hawaii National Guard assisting in the evacuations.

Kilauea, Hawaii's most active volcano, erupted on May 3, wreaking destruction amid a slew of natural threats, according to the Washington Post. At least 10 fissures spewing noxious gases and fountains of magma have opened in the census-designated place of Leilani Estates, which is located in the island’s eastern district of Puna.

Hawaii Governor David Ige signed an emergency proclamation for Hawaii County the same day that Kilauea erupted, according to Hawaii News Now. As of Sunday, May 6, the eruption has destroyed 26 homes, the Associated Press reports.

“This is a very fast-moving situation,” Hawaii County Mayor Harry Kim said, per Hawaii News Now. “This is unfortunately not the end.”

Hawaii county and state officials as well as federal officials warned resident to evacuate in the days leading up to the eruption, the AP reports. Hawaii County issued a mandatory evacuation for residents of Leilani Estates and also called the Hawaii National Guard to assist in evacuations. The American Red Cross has opened two shelters for evacuees.

Despite the evacuation, the Hawaii County Civil Defense Agency allowed Leilani Estates residents to return to their homes that day to collect belongings and medications, Hawaii News Now reports. The agency had to briefly put re-entry on hold after traffic on Highway 30 backed up.

The civil defense agency discouraged the presence of outsiders in the area. “Please, the residents of Leilani need your help by staying out of the area. This is not the time for sightseeing,” the agency said, per CNN.

"All of us have got to remember this is a tragedy on them and we have to work …. to minimize it as best as possible," Kim said, per Hawaii News Now. "I’m from Puna so I am not going to be a hypocritical. That’s my home and I love Puna. There is no place to me more beautiful … and we know the hazards."