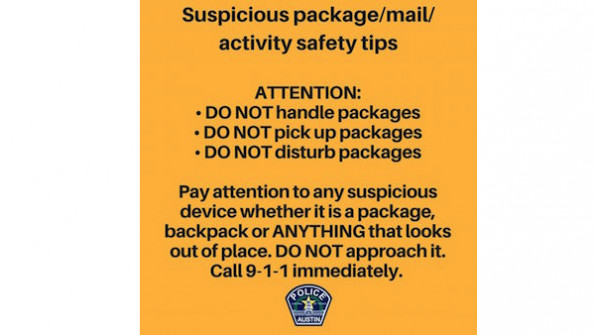 Local police identify Austin bombings suspect, who killed himself as police closed in

The suspect behind the recent string of bombings in Austin, Texas blew himself up on March 21 after Austin police identified him and moved in to apprehend him.

The suspect behind the recent string of bombings in Austin, Texas blew himself up on March 21 after Austin police identified him and moved in to apprehend him.

Austin police identified Mark Anthony Conditt, 23, as the suspect behind four bombings in the Austin area and one bombing near San Antonio that killed two and injured several, the Austin American-Statesman reports. The incidents began on March 2.

Local, state and federal law enforcement officials took numerous actions to identify the suspect and to diffuse potential bomb threats they had discovered. Throughout the bomb explosions, law enforcement has worked to reconstruct the bombs from shrapnel and remains of the detonated bombs, looking for common construction, explosive residue and DNA, the New York Times reports.

“A bomber often believes that the device itself is consumed in the thermal effect of the blast, and that he is giving himself distance from the criminal act,” a federal agent and explosives expert who spoke on the condition of anonymity because he was not authorized to speak to the media, he told the Times. “They think they have autonomy, but they don’t.”

Additionally, investigators realized the bombs were homemade, so they searched for receipts around the Austin area looking for clues, according to CNN.

"Agents fanned out throughout the city of Austin going to big box retail stores as well as locally owned stores trying to determine whether or not there were suspicious purchases," Tony Plohetski, an investigative reporter for the Austin American-Statesman, told CNN.

Through receipts, officials named Conditt as a person of interest, according to CNN. Federal search warrants gave investigators Conditt’s IP address, which showed them that he’d made suspicious Google searches.

The package that exploded at the FedEx center in Scherz, Texas, as well as another suspicious packages shipped via FedEx were found to have been mailed from a FedEx store in Sunset Valley, located within Austin, according to the Times.

A major breakthrough came when police observed video of Conditt shipping an explosive device from a south Austin FedEx store, CNN reports. After becoming convinced that the man in the video was the chief suspect, police tracked Conditt to a Round Rock, Texas, hotel through cell phone technology. Police went to the hotel and saw the vehicle that witnesses had reported Conditt was driving.

Police surrounded the hotel and waited on tactical team and ballistic vehicle backup as a precaution against a suspected bomber, according to CNN. As they waited, Conditt slipped away from the scene in his vehicle, and police immediately gave chase.

As law enforcement chased Conditt through a service road alongside I-35, Conditt stopped in a ditch and a SWAT team approached cautiously, CNN reports. The suspect then detonated a bomb, which killed him and injured an officer.

Throughout the search, the Austin Police Department fielded over 1,200 calls about suspicious-looking packages, USA Today reports. All in all, about 500 local, state and federal law enforcement officers worked to track Conditt down.

However, officials still aren’t sure if Conditt could have mailed additional packages prior to his death, according to CNN. Police are still searching for accomplices, but believe Conditt acted alone, per the Statesman.

A motive has not yet been determined, the Statesman reports.