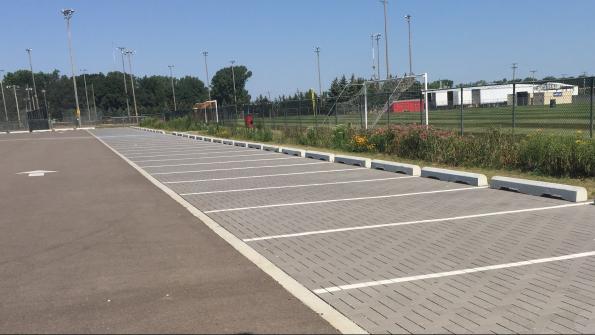 A parking lot goes from environmental culprit to eco-partner

The north parking lot at Kyte Munroe Memorial Park was compacted gravel and dirt. The spring thaws had warped the surface forming puddles and muddy conditions. The park is the nexus of recreational sports leagues in the community and complaints rolled in. When it rained, runoff from the lot flowed directly into the storm sewer on Harper Avenue, along with all of the hydrocarbons, heavy metals and corrosive fluids that had dripped from the parked cars. All of it was deposited less than a mile away into Lake St. Clair, Metro Detroit’s recreational gem.

The grant allowed Babcock to consider a solution that would please residents and make a serious contribution toward protecting a major water resource. He already had an estimate for $338,000 to do conventional asphalt resurfacing of the gravel lot. The grant made it feasible to consider a pervious paver parking lot. In February 2016, TSP Environmental was awarded the project with a bid of $435,665.

The parking lot’s secret is what lies unseen and underground with green infrastructure projects.  The perimeter parking area used special pavers. The 9.5 x 4.75 inch pavers were 3-inch thick manufactured stones coated with a sealer that repelled water and oil. They also came with a spacer that left a quarter-inch gap between stones. That gap in the pavers was filled with a clean, fine stone chip. The pavers were set on 2-inches of slightly coarser limestone bedding. Below that were two more layers of progressively larger aggregate. The effect was to turn the paver portion into a large rainwater collection system, allowing rapid penetration of rainwater through a series of natural filter bases into the sub-base, subsoil, and eventually recharging the groundwater table. Rainwater that flowed off the paver is collected in perimeter bioswales. The bioswales were constructed of coarse aggregate with permeable planting soil, on which special plants and grasses were planted. The bioswales allow excess rainwater to be absorbed by the plants and grasses.

The new lot reduces the amount of contaminant-bearing stormwater dumped into Lake St. Clair by 95,000 gallons per rain event. The project’s stakeholders believe it is good value for the investment. So does the American Public Works Association, which awarded St. Clair Shores its Project of the Year award.
The Kyte Monroe Memorial Park North Parking Lot was commissioned on Oct. 26, 2016.

Appropriately, it was raining.