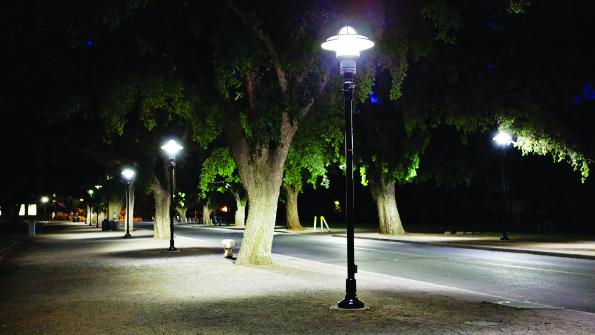 Upgrading streetlights to smart LEDs is a no-brainer.

Smart municipalities around the world have embraced use of LED technology in outdoor lighting systems for a multitude of reasons, including energy and cost savings, more effective and efficient lighting and reduced light pollution. However, what many municipalities in the U.S. are just discovering is that including new smart technology and communications capabilities with their LED upgrade is an even smarter proposition.

A light emitting diode (LED) lamp not only reduces the amount of energy needed to produce the same amount of light as a conventional HPS (high pressure sodium) streetlight, but since it is an electronic device, it is far more controllable and ultimately more valuable than a conventional streetlight. Think of the old wired landline phone you grew up with, and compare that to the smart phone sitting beside you. That’s the difference between traditonal streetlights and today’s smart LED streetlight.

For example, adding sensors, controls and communication technology to a streetlight vastly improves the utility of the streetlight. Smart technology can be included at the same time as the LED upgrade, or it can be added to LED streetlights already in place.

Sensors, controls and communication technology in your streetlights have the potential to create a grid of Internet of Things devices throughout your town. Each light pole becomes an intelligent brain cell in your smart city.

Sensors can “sense” a variety of conditions in the vicinity of the streetlight, including air quality, light levels, weather conditions, motion and sound to name just a few. The sensors provide data that can inform decisions or actions.

Controls provide the ability to modify the quantity and quality of the light including light level and hue, based on time, activity levels and other conditions.

Communications technology connects all of the lights into a smart grid, enabling them to talk to each other and to a central management system run by your public works department. Data from the sensors, and real time responsiveness to data – the control adjustments enabled through the central management system – are the foundation of a smart city.

Goldendale in south central Washington, home to Goldendale Observatory State Park, opted for adding controls as part of their LED upgrade to over 300 streetlights. Their calculations predict up to 75 percent savings on energy consumption and a payback in less than four years. “For us, adding controls was an obvious choice. The controls give us real time feedback on the condition of each light improving our maintenance response time and cutting maintenance costs, and they monitor exact power usage enabling us to pay for only the energy we use,” says Karl Enyeart, the city’s Public Works Director. Enyeart points out that the smart light controls enable the City to reduce energy use beyond what is possible with just LEDs with no controls. They also provide the bonus of increasing the lifetime of the LED lights since they are on for less time and at lower power levels than would be required if smart controls were not used.

Further south, San Jose, Calif., has initiated a conversion of 62,000 streetlights to LED lights with smart controls. In addition to maintenance cost savings and the expected energy cost savings of 40 to 60 percent, the new streetlights offer advantages to people and the environment. “The new streetlights eliminate the hazardous materials used in sodium vapor lamps, reduce light pollution and preserve the night sky in late evening for astronomical research at Lick Observatory, and enhance street safety with better light quality and improved visibility,” says Jill North, innovation program manager for the San Jose Department of Transportation.

Los Gatos, Calif., recognized the value in converting streetlights to LEDs years ago, and just completed the upgrade of their 2000 streetlights to LED lights. The conversion to LED streetlights has dramatically reduced energy usage resulting in savings of $60,000 per year. When the upgrade to LEDs was first in consideration, smart technology for streetlights was in its infancy. Technology has advanced considerably since then, and Los Gatos is currently evaluating the addition of sensors and controls to their LED streetlights. “The payback period for the LED upgrade was only six years, so it was an easy decision,” says Matt Morley, the city’s parks and public works director. “We are now looking at adding sensors and controls to the streetlights as a way to offer more services to our citizens and visitors to the town, and further leverage the capability of the infrastructure we have in place.”

Conversion to LED technology has become not a question of why, but when. Adding sensors, controls and communications technology to the LED lights is now the decision facing municipalities. While in some cases funding can be an impediment to upgrading to LEDs and controls, many cities in the U.S. have taken advantage of grants and rebates from federal and state government agencies and utilities. Another challenge for some cities is ownership of the light poles. While some cities own the poles, in many cases the local utility owns the poles. Creative cities like Rancho Cucamonga, Calif., have run the numbers and determined that buying the poles and then upgrading to smart LEDs is a smart proposition for them.

While the choices with LEDs lights are fairly straightforward, the introduction of sensors, controls, communications technologies and central management systems brings new complexities to go along with the new capabilities. The large diverse pool of companies offering solutions in this space means plenty of options and features for you to choose from but it also means you have to do your homework. City employees looking into these technologies should ask about compatibility and standardization. They should also ask whether power line communication (PLC), wireless communication (radio frequency) or cellular communication is the way to go (in many cases it’s a combination of all three.) They are smart to ask about who owns the data. And they should question who will be able to utilize the data once it is in hand. As the industry continues to evolve, the successful companies will answer these questions and provide manageable and affordable solutions.

Cities around the world are adopting smart, connected LEDs in their streetlights, and there are numerous successful implementations. Whether you have plans to upgrade your streetlights to LEDs or have already done so, now is the time to evaluate smart technologies to enhance the value of your streetlight system. Don’t be content with just LED lights or simple photocell controlled lights. There is so much more you can do.

Thomas Cook has three decades of experience in hi-tech with both hardware and software companies. He is currently working with Echelon Corporation on their smart cities initiative.