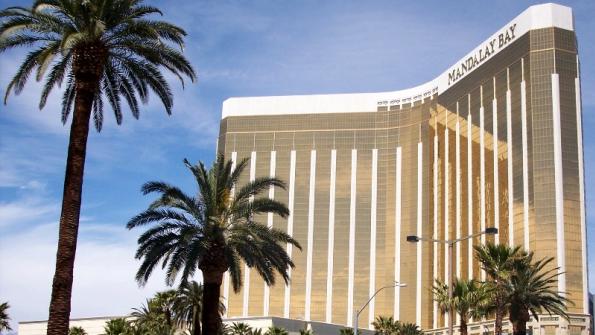 Police and officials in Las Vegas are gathering answers to last night’s mass shooting in the city.

Officials across the country are condemning last night's mass shooting in Las Vegas, while thanking local officials who are working to gather information and answers.

The shooting, which is being called the worst of its kind in modern U.S. history, occurred at an outdoor concert close to the Mandalay Bay Resort, the New York Times reports. The suspected gunman — Stephen Craig Paddock, 64, of Mesquite. Nev., — fired for 10 to 15 minutes on concert goers from a room at the resort using what were thought to be fully automatic weapons, according to NBC News. SWAT teams stormed Paddock’s room using explosives, but found him dead.

As of Monday afternoon, 58 were killed and at least 515 were wounded in the shooting, the BBC reports. At least one off-duty police officer was among the dead, the Times reports.

"The act and insanity of a madman shall not define us or keep us from living whole and meaningful lives with pride in our shared humanity," Las Vegas Mayor Carolyn Goodman said on Twitter. "Our prayers for everyone and a huge thank you to our great law enforcement and first responders."

The mayors of New York, Nashville, Tenn. Orlando, Fla. and even London all expressed their condolences and prayers to the city via Twitter. Debra March, the mayor of Henderson, Nev., which neighbors Las Vegas, and its four city councilmembers thanked first responders and expressed their gratitude for the support they've received from across the world.

"We ask everyone in Henderson and across our community to come together in support of all those who have been impacted by this horrific act," the Henderson officials said in a statement, per The Now Report. "We know that employees of the City of Henderson and their family members have been directly affected by this senseless act of hatred and we will do all we can to care for our team members and their loved ones.”

President Donald Trump called the shooting “an act of pure evil,” and sent his “warmest condolences and sympathies to the victims and families of the terrible Las Vegas shooting” via Twitter, Bloomberg reports. Attorney General Jeff Sessions offered federal support, but noted that Clark County, Nev., Sheriff Joseph Lombardo is handling the investigation.

Las Vegas officials have posted addresses and phone numbers on the official city website for reuniting with families and for donating blood.