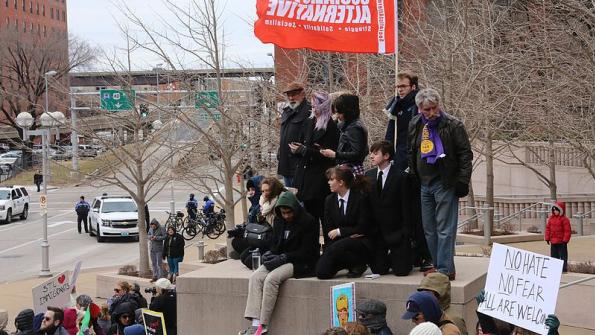 Police response to protests over the acquittal of a St. Louis police officer in the shooting of a black man has come under fire.

Police response to protests over the acquittal of a St. Louis police officer in the shooting of a black man has come under fire.

On Sept. 15, a St. Louis circuit judge acquitted former officer Jason Stockley, who had been charged in the 2011 killing of Anthony Lamar Smith, 24, after a high-speed pursuit, NBC News reports. Shockley claimed he was in danger when he fired, and authorities claimed that Stockley planted a gun on Smith.

Protests throughout the city flared up after the decision was announced. While demonstrations were peaceful during the day, they turned violent at night with people throwing rocks, bricks and chemicals at police officers, smashing windows and committing other acts of vandalism, PBS reports. Police rushed out onto the scene in riot gear over the weekend, which increased tensions.

By Sept. 17, police began making mass arrests and detained over 70 people, according to PBS. One controversial tactic police used that day — known as ‘kettling’ — involves police boxing in a group of protesters and restricting them to a given area, to better help them determine how to control access to the area, CNN reports.

During the arrests, multiple people reported that police chanted “whose street, our street,” according to PBS. Later that night, Interim St. Louis Police Chief Lawrence O’Toole said that “police owned tonight” after making 80 arrests, the New York Times reports. “We’re in control. This is our city, and we’re going to protect it,” O’Toole later said.

The tactics and language used have since come under fire.  Antonio French, a former St. Louis alderman, wrote on Twitter, that authorities are "repeating the mistakes of their predecessors,” per NBC. St. Louis Mayor Lyda Krewson called O’Toole’s remarks an “inflammatory comment,” Rolling Stone reports. She also denounced the chanting, noting, “I wish that wouldn't have been said. That's not appropriate for police officers to say.”

St. Louis protesters also claimed to have been roughed up during the arrests and kettling that occurred, CNN reports. Protesters have since gathered outside the downtown St. Louis jail, to show solidarity for people who were detained over the weekend, according to Rolling Stone. “It was the most brutal arrest I’ve ever experienced in my life,” said Tony Rice, an activist at the protests, per Officer.com. “I thought I was going to die.”

"We have to separate the tactic of mass arrest from inappropriate use of force when implementing that tactic," said David Klinger, a professor of criminology and criminal justice at the University of Missouri-St. Louis, per CNN.

The American Civil Liberties Union of Missouri requested that the city keep video evidence due to a potentially impending lawsuit challenging police tactics used over the weekend, Reuters reports. The city has since worked to remedy the situation by giving a police civilian oversight board subpoena powers and changing the investigation procedures for police shooting investigations.

“We, here in St. Louis, are once again ground zero for the frustration and anger at our shared legacy of these disproportional outcomes,” Krewson said, per Reuters. “The only option is to move forward.”