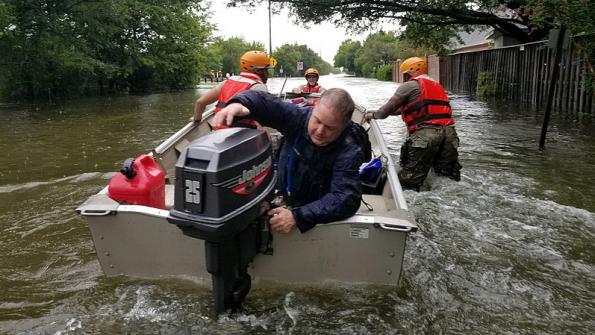 Teams of first responders across the country have converged in Texas to aid local and state officials in Tropical Storm Harvey relief efforts.

Teams of first responders across the country have converged in Texas to aid local and state officials in Tropical Storm Harvey relief efforts.

Harvey has relentlessly dumped at least 19 trillion gallons of water on Texas since the storm began, Mashable reports. About 1.2 trillion of those gallons were dumped on Harris County alone, where Houston is located. Between 25 and 30 percent of Harris County, or 444 square miles was flooded as of Aug. 29, according to the Washington Post.

One such force, Colorado Task Force One, deployed 45 firefighters from agencies in Denver, Aurora, Castle Rock, Greeley and other cities, the Associated Press reports. New York City deployed 120 first responders on Sunday morning that belonged to the city’s police and fire departments as well as EMS, the NY Daily News reports.

“We’ve been through something like this and we understood that lots of people came here to help New York from all over the country after Sandy,” New York Mayor de Blasio said, per the Daily News. “We believe in helping our fellow Americans when they are in need.”

Many such teams had little time to prepare once notified. The 16 professionals that Oklahoma City’s urban search and rescue squad sent to Texas received a call at 1:43 a.m. on Monday and deployed just over six hours later, NewsOK reports. The 45 first responders from Pennsylvania Task Force One had just four hours to prepare, CBS Philly reports.

The 49 firefighters from Ohio cities like Bedford, Euclid, Green, New Franklin and Ravenna that comprise part of the Ohio Task Force One, could be carrying out missions in Texas for two weeks.

"These guys are highly trained, dedicated, motivated, this is what they train years and thousands of hours to do, so I know they're in good spirits and doing a lot of good for the residents of the state of Texas," Bedford Fire Lt. Brian Harting told Ohio TV station WJW.

By Aug. 30, over 18 people had died and 13,000 people were rescued in southeast Texas from Harvey's impact, the Times-Picayune reports.