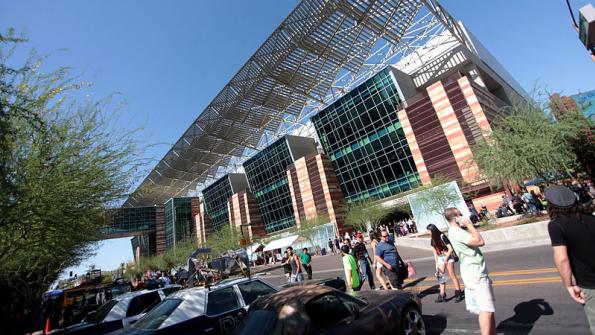 The Phoenix Police Department and other government officials have defended its use of nonlethal weapons to control a crowd protesting a speech from President Donald Trump, as well as its associated rally.

The Phoenix Police Department and other government officials have defended its use of nonlethal weapons to control a crowd protesting a speech from President Donald Trump, as well as its associated rally.

A crowd had gathered outside the Phoenix Convention Center starting around 3:00 p.m. to protest a speech that President Trump was giving that night, AZCentral reports.

The protest started out peacefully, but officers and protesters report that officers operating a circling police helicopter as well as ground-based officers began telling the crowd to disperse, threatening arrest for unlawful assembly, CNN reports.

"People in the crowd began fighting and throwing rocks and bottles at police," Phoenix Police Sgt. Jonathan Howard said in a statement to CNN. "They also dispersed some gas in the area. Police have responded with pepper balls and oc (pepper) spray in an attempt to disperse the crowd and stop the assaults."

“Officers were forced then at that time to really protect themselves, to protect the community, to protect property, and they did so successfully and professionally,” Phoenix Police Chief Jeri Williams,, said, per the Post.

The response has garnered criticism. Phoenix Allies for Community Health Clinic Director Amy McMullen — a street medic herself — voiced surprise that no injuries from a potential stampede resulted from the tear gas canisters being used, AZCentral reports.

"I've seen it all," McMullen said, per AZCentral. "I feel like after last night, that was probably one of the worst responses by the Phoenix police that I had ever seen."

Phoenix Mayor Greg Stanton, who urged Trump not to visit Phoenix after his comments made on the Charlottesville violence, called the small number of assaults on police officers “very, very unfortunate,” CNN reports. He has committed to a “thorough and transparent” review of police actions that night, AZFamily reports.