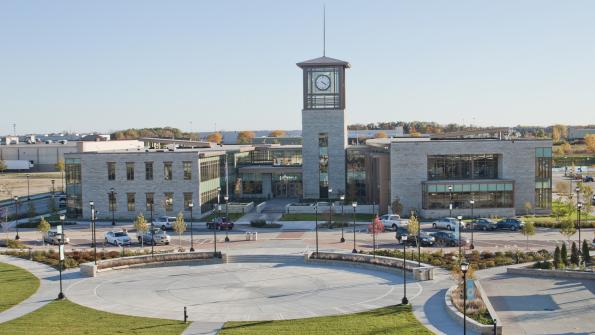 For many municipal governments, a point arrives when they outgrow their city halls — whether physically, financially, technologically or ideologically.

Some small cities that have reached such a juncture have replaced their former city halls with multi-use municipal complexes. These structures combine updated city hall administration with recreational amenities like libraries, fitness centers or arts centers. Others are augmenting these multi-use buildings with adjacent commercial developments. Officials at these cities note increased citizen participation in these public amenities, while the complexes as a whole provide other benefits to cities.

“People coming into city hall don’t come there because they want to come to city hall,” Oak Creek, Wis., Director of Community Development Doug Seymour says of the Oak Creek Civic Center, which opened in October 2015. “Moving into this new facility, it was amazing the impact on staff by seeing people in this building who genuinely wanted to be in this building.”

The new $24.1 million Oak Creek Civic Center features a large public library, an updated city hall and multiple multi-use meeting spaces and conference rooms. The library has areas designated for children, video gaming, technology, doing work and quiet reading. The new city hall consolidates functions of multiple departments into one area, where residents can ask questions and get permits across a variety of departments instead of having to go to multiple places.

Drexel Town Square is still under development, but its site shows that retailers, lodging and restaurants have already established locations there.

While Seymour admits “the jury is still out,” on the effect of the Oak Creek Civic Center on civic engagement, he says “there’s no question” that the complex has helped increase citizen participation in city events.

Another suburban city, Wylie, Texas, found success in engaging its citizens in the actual planning process of its Wylie Municipal Complex, which was completely open by March 2011.

“Part of the blessing and the curse of our city is that we live close to a huge city… Dallas, then all the surrounding suburbs,” Wylie, Texas, Mayor Eric Hogue says. “They’ve got recreation centers; they have the different amenities. So people would move out to Wylie and go, ‘Where’s the rec center?’”

City officials discovered through surveys that citizens wanted a recreation center in the city, Hogue says. The city was also experiencing a population spike around that time — it grew from about 15,624 people in 2000 to 47,701 in 2016. Wylie’s 6,000-square-foot library was proving to be too small for demand, and the city needed a new city hall to accommodate population growth.

Officials proceeded to set up a committee that included citizens to discuss the buildout of a city hall, a recreation center, a new library, and a surrounding complex to tie all three together, Hogue says.  The information gleaned from those discussions was brought to town halls. Citizens then voted in favor of constructing a city hall, a library and a recreation center within a bond election in 2005.

The Wylie Municipal Complex connects the three buildings with breezeways while also including walking trails and several art installations. The new library accommodates many patrons including the 35,000 Wylie citizens that Hogue says currently have library cards. It offers technology and GED courses, while the recreation center offers amenities like a climbing wall and a variety of activity classes for all ages.

“It’s a very busy library, the rec center’s the same way,” Hogue says. “It’s really cool, but that’s what we wanted it to be, that was our intention. And it’s great, because the citizens agreed with that.”

Cordova, Alaska’s Cordova Center, which was completed in spring 2016, garnered citizen engagement both in its planning process as well as after its opening, according to Cathy Sherman, Cordova information services director and Cordova Center project lead. The project, however, took about 17 years to fully realize from initial planning to completion.

Cordova — a fishing city of 2,454 only accessible by air and sea — was still reeling from the Exxon Valdez’s socioeconomic devastation when the city began planning the Cordova Center around 1999. Given the community’s “angst of oil spill hangover,” city officials “just knew it wasn’t going to succeed if the idea didn’t come from within the community,” Sherman says.

So between 2002 and 2004, the city hosted year-round public planning and processing meetings that Sherman says had lots of citizen engagement. Challenges such as snowstorms, building into a cliff side with little bedrock and issues with a contractor delayed the project’s completion.

The performing arts theater can show theatrical, dance and musical performances as well as films and speaking engagements. The library has dedicated spaces for kids, and both it and the center’s museum are twice the sizes than their previous spaces.

Sherman attributes the space increase and upgraded accommodations as the reason for increased attendance at city council meetings, as well as a library that’s regularly full. Festivals that have been held at the Cordova Center have also been well-attended. “We built it as the heart of the community, and that’s kind of what’s happening — it’s just the center of activity,” she says.

The city has also capitalized on renting the Cordova Center out to functions like weddings, conferences and civic meetings. Sherman predicts the city will come close to earning $50,000 from rentals this year. “[It’s] an income stream we didn’t have,” she notes.

But arriving at the ribbon cuttings for these complexes doesn’t always come easy. All three cities encountered challenges along the way.

In addition to its construction troubles, Cordova officials had a tough time just convincing citizens, outside funders and Alaska politicians that the plans for the Cordova Center could actually be realized, Sherman says. “That was probably the biggest thing we had to overcome and probably the most satisfying thing, that we were able to show them.”

With Wylie’s highly open process and the varied input from citizens, Hogue notes that coming to a consensus on everything from architect selection and build out schedules to carpet color proved to be a challenge. “Our biggest challenge was [determining] paint color if you want to know the truth,” Hogue says with a laugh.

“Trust your citizens. Give the power to the people, and you’ll end up with something that is truly amazing and the people will be proud of,” Hogue advises. “Because it’s their city hall.”