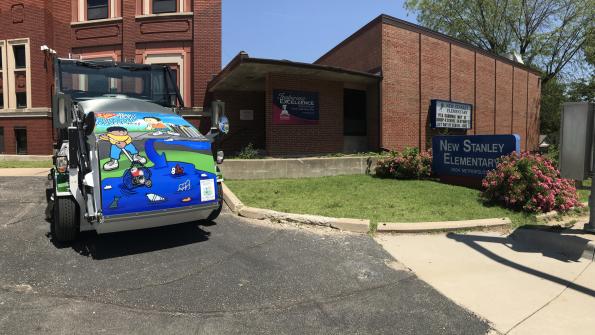 An Elgin Pelican street sweeper in Kansas now features an environmentally themed wrap that was designed by some fifth-grade students at New Stanley Elementary School. The students were the winners in a sweeper wrap design contest.

During a recent event held at New Stanley Elementary school in Kansas City, Kan., fifth-grade students Nicolas “Alex” Rincon, Diego Heraldez Dessens and Julian Bush were recognized as the winners of a contest for the design of an environmentally themed wrap for an Elgin Pelican street sweeper.

“We were amazed by the creativity and originality of the designs the students submitted. It really made the judging difficult,” says Jeff Miles, vice president of Key Equipment & Supply. “But the artwork and messaging of the winning design really stand out.” The photo to the right displays a closeup of the winning design.

Mark Holland, mayor/CEO of the Unified Government of Wyandotte County/Kansas City, congratulated the students for their accomplishment during the event. The newly wrapped Pelican sweeper bearing the winning design and the slogans “YOUR Small Steps WILL Save the Environment,” and “Throw YOUR Trash Away The CORRECT Way!” was unveiled to the school’s entire student body.

Steve Hyink, president of Key Equipment & Supply, and his team have developed sports-themed wraps for several municipal sweepers in recent years. With approval from the United Government of Wyandotte County/Kansas City, Miles worked with Ryan Most, principal at New Stanley Elementary, to establish a design contest challenging the fifth graders to develop environmentally themed designs that would be used for the sweeper’s wrap.

To kick off the contest in mid-April, Miles spent time with the students at New Stanley Elementary, teaching them about the importance of street sweeping in preventing pollution and helping the environment. He also showed the students photos of the Pelican sweeper and explained necessary details on how their designs would be applied to the machine.

Students submitted a total of 60 contest entries. Out of those entries, six designs were presented to the Unified Government of Wyandotte County/Kansas City to make the final choice. Mayor Holland combined two designs submitted by three students to come up with the final wrap design.

“Not only is this wrap visible to everyone as the Pelican travels along its sweeping routes, it’s a source of great pride to the people in the community,” Miles says.

The Elgin Pelican three-wheel mechanical sweeper is based on one of the company’s original street sweeper designs, which has been continuously improved since 1914. The Pelican easily handles heavy, compacted dirt and bulky debris found in the street.