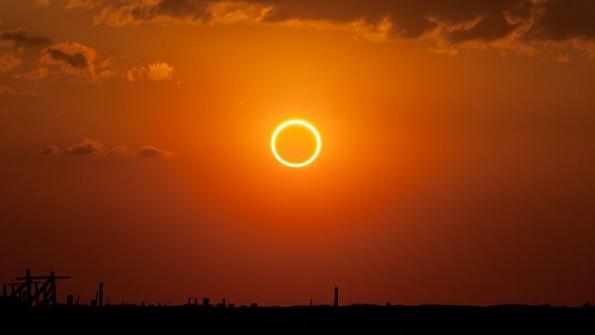 As the August 2017 total solar eclipse approaches, cities within the viewing path are making preparations for an increased number of out-of-towners.

As the August 2017 total solar eclipse approaches, cities within the viewing path are making preparations for an increased number of out-of-towners.

On Monday, Aug. 21, the moon will pass in front of the sun, creating a shadow on the surface of the earth, according to the National Aeronautics and Space Administration (NASA). Across the country, a partial solar eclipse will be visible; however, the full eclipse has the best chance of being visible within a relatively thin line that crosses the entire U.S., known as the path of totality. The last such eclipse took place in 1918.

“This is a once-in-a-lifetime opportunity for many people not just in the United States but around the world,” Pocatello, Idaho, Mayor Brian Blad in a news release, per the Idaho State Journal. “We want our businesses to be prepared and all residents ready that day-to-day life may be impacted by the influx.”

The Idaho Falls area in which Pocatello lies has the best chance of viewing the eclipse in the country, and Pocatello is preparing for the event by hosting town hall meetings that the general public is invited to, according to the Journal. The event is expected to bring hundreds of thousands to eastern Idaho.

Multiple law enforcement, emergency and public health personnel from several eastern Idaho counties are working with the Idaho government to prepare for any emergency situations during the event, per the Journal. The Idaho Department of Transportation will also put most highway construction and maintenance projects on hold during that weekend to ease traffic woes.

“Pocatellans have an amazing sense of hospitality and we want to make sure we put our best foot forward for our guests,” Blad said in the release. “I know of a couple from Denmark who booked their accommodations in Pocatello a year in advance.”

Some cities are taking advantage of the event to bolster their communities. Hopkinsville, Ky., has already sold out hundreds of viewing spots for the eclipse in two of its parks, and the city is now selling spots in another park, according to The Leaf-Chronicle.

Others are hosting events for the eclipse. The Franklin, N.Co., government will be hosting a block party for the total solar eclipse, including a concert, a slip-n-slide, an eclipse viewing station and a live stream of NASA’s eclipse coverage, according to the town’s site.

About 45,000 people are expected in the small, 26,000-person city of Carbondale, Ill., to watch the eclipse, Space.com reports. The city and Southern Illinois University will be jointly hosting an eclipse program that will feature speakers, videos and feeds from other areas within the path of totality.

“Americans have not had a chance like this to engage in cosmic awareness since the launching of Apollo 11 in 1969. That's what this is like," Mike Kentrianakis, project manager for the American Astronomical Society's Solar Eclipse Task Force, told Space.com. "We need to educate [Americans] and excite them and get them enthusiastic. When they see this event, they will know that we were not at all underestimating the beauty of this."