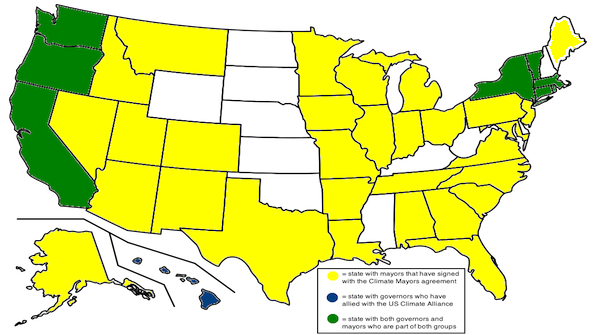 Over 200 mayors and governors have pledged to uphold guidelines set forth in the Paris Agreement, in the wake of President Donald Trump’s June 1 announcement of intention to withdraw the U.S. from the international agreement.

Over 200 mayors and governors have pledged to uphold guidelines set forth in the Paris Agreement, in the wake of President Donald Trump’s June 1 announcement of intention to withdraw the U.S. from the international agreement.

The Paris Agreement, which 195 countries signed in December 2015, is a voluntary global agreement that acknowledges the threat of climate change and pledges signatory countries’ efforts to limit greenhouse gas emissions, Vox reports.

That same day, soon after the announcement, a group of around 80 mayors published an open letter on online content platform Medium announcing their intention to uphold commitments made in the Paris Agreement, Fortune reports.

As of June 5, that number jumped to 211 mayors, who call themselves the US Climate Mayors, per the post. The group represents about 54 million Americans.

“We will continue to lead. We are increasing investments in renewable energy and energy efficiency,” the open letter reads. “And if the President wants to break the promises made to our allies enshrined in the historic Paris Agreement, we’ll build and strengthen relationships around the world to protect the planet from devastating climate risks.”

Several U.S. governors have also formed a bipartisan coalition called the U.S. Climate Alliance that pledges to meet the Paris Agreement’s goals, according to the Greenfield Recorder. So far, the governors of California, New York, Washington, Vermont, Massachusetts, Connecticut, Rhode Island, Oregon and Hawaii have committed to joining the alliance, per the Recorder, OPB FM and a Hawaii Governor news release.

The White House has expressed indifference towards the mayors’ and governors’ goal of upholding Paris Agreement guidelines, citing states’ rights as giving them full ability to do so, CNN reports.

“We believe in states' rights and so if a locality, a municipality or a state wants to enact a policy that their voters or their constituents believe in than that's, that's what they should do,” White House Press Secretary Sean Spicer told reporters, per CNN.

Some mayors have expressed skepticism of the Climate Mayors’ agreement.

“I’m not convinced government should pose in matters that don’t change anything and don’t do anything other than virtue signaling,” he told the Herald, adding, “I’ll start worrying about climate change when the rich guys stop flying in their private jets.”

While Prosser, Wash. Mayor Randy Taylor believes climate change is real, he agrees with Thompson that municipal government getting involved with the Paris Agreement is overreach, the Herald reports.

“Our role is to protect our citizens, run our city, and protect our assets,” he told the Herald.