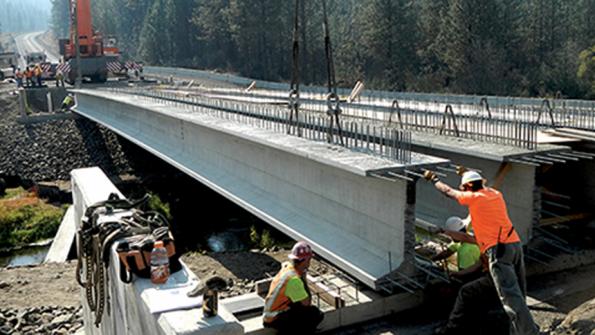 The term “super-girder” resulted from the efficient shape of this new bridge girder family, which uses high strength concrete and 0.6-inch diameter prestress strand to maximize span length and minimize the number of girders.

Precast, prestressed concrete girders have been used in bridge construction for over 65 years and have proven to be economical and durable across the U.S. The photo belop on the left shows one of the girders being deployed.

In many states, especially Washington, prestressed girders, combined with a cast-in-place deck, or an all prestressed girder including precast deck, constitute the superstructure system of choice for bridges that span to over 200 feet.

General contractor Wesslen Construction, Spokane, Wash., the low bidder on the project, awarded Oldcastle Precast-Spokane the contract to manufacture and haul the wide-flange super-girders for the new Miles Creston Bridge.

Accordingly, the optimized girders were designed with a 49-inch-wide top flange and a 38-inch-wide bottom bulb. These wider flanges provide more lateral stability during transport than the shapes they replaced, and use a much larger prestress force to increase spans and minimize the quantity of girders. In this case, spanning 136.8-foot with only a 58-inch depth of girder provides an aesthetically pleasing profile. It also provides adequate clearance above the river for 100-year flood passage.

Each “super-girder” was custom-manufactured in Spokane and transported on trucks specially-designed to hold the weight. Due to their size, the girders had to be transported to the construction site on steerable rear supports. Once the girders arrived on site, crews used two cranes to set them on top of the new bridge abutments.

Several years ago, the “super-girder” family of girders originated when WSDOT worked with the industry to create an optimized family of girder shapes that would be capable of longer spans, have more stability during shipping, present a shallow profile for stream clearance and aesthetics and fully use High Performance Concrete (HPC) with its higher strengths by using 0.6-inch-diameter prestressing strands.

As one of the leaders in the use of the new optimized girder shapes, the Northwest has been using the “Super-Girder” shape at a 100-inch depth on spans more than 200 feet for many projects, with many more structures in this span range being currently designed.