A section of an Oregon Solar Highway project. Image via Wikimedia Commons. 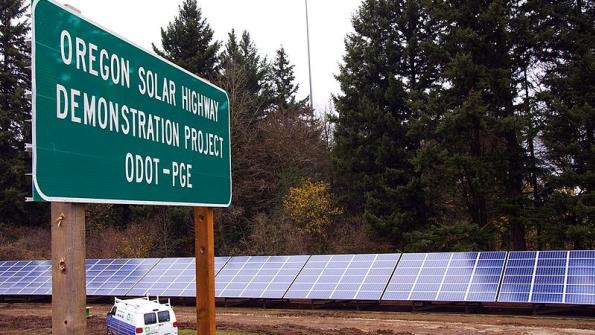 Many cities across the U.S. have pledged to use renewable energy for all or a large portion of their energy needs. This week, two major cities joined the movement.

Many cities across the U.S. have pledged to use renewable energy for all or a large portion of their energy needs. This week, two major cities joined the movement.

On April 9, Chicago Mayor Rahm Emanuel announced his city’s commitment to power all of its public buildings by 100 percent renewable energy by 2025, according to Chicagoist. The renewables-powered buildings will include government buildings, park district buildings, Chicago Public Schools, Chicago Housing Authority buildings and community colleges.

“As the Trump administration pulls back on building a clean energy economy, Chicago is doubling down,” Emanuel said in a news release. “By committing the energy used to power our public buildings to wind and solar energy, we are sending a clear signal that we remain committed to building a 21st century economy here in Chicago.”

On April 10, the Portland, Ore., and Multnomah County, Ore., governments committed to using renewable energy for all electricity needs by 2035, according to the Portland Business Journal. Subsequently, the city and county would change all of their leftover “dirty” energy sources — projected to mostly be fossil fuels in transportation — to renewable sources by 2050, the Business Journal and OregonLive report.

Unlike Chicago’s plan, Portland and Multnomah County’s plans will apply to the entire community, not just government buildings.

“I would be the first to say these are stretch goals,” Portland Mayor Ted Wheeler told the Business Journal. “I believe they are achievable, but they can’t be achieved through passive means. We have to make deliberate steps and deliberate investments and deliberate policy changes for this to become a reality, and I’m fully committed to that.”