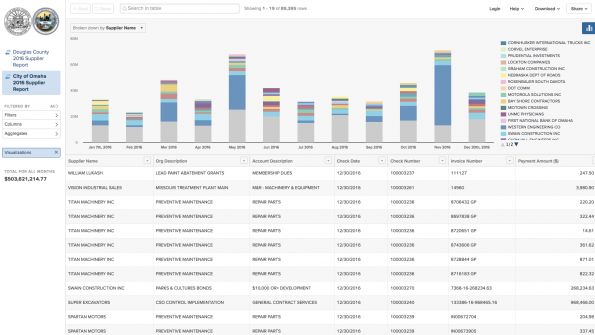 Cities and counties across the U.S. are using the OpenGov platform to make their budgets transparent for residents.

Cities and counties across the U.S. are using the OpenGov platform to make their budgets transparent for residents.

On April 4, Omaha, Neb. and Douglas County, Neb., jointly launched a new website detailing how and where the city and county spends their money, the Omaha World-Herald reports. Information for Omaha’s spending in 2016 is available, while it’s working on getting its data for the first few months of 2017 online. Douglas County had previously made its data available.

However, officials report that the site can have some discrepancies, the World-Herald reports. The site shows Omaha paid $12 million to Waste Management, while Omaha Financial Director Steve Curtiss says the city in reality paid Waste Management around $20 million

“It’s like a lot of giant data sets. You’ve got to be a little careful,” Curtiss told the World-Herald. “I would say this is a good place to start, but I’d want to make sure anyone does their due diligence before making some giant conclusions.”

Kenton County, Ky., launched its version of the OpenGov platform on March 15, according to the Lane Report. The county’s platform shows five years worth of spending and revenue data in a user-friendly format with the ability to break the data down by department, fund, expense, revenue type and others.

“OpenGov is in line with our continued efforts to be transparent with our community,” Kenton County Judge Executive Kris Knochelmann told the Report. “It gives residents the tools to understand how the County allocates public money without having to be an expert in finances.”

On Feb. 28, Boston released a beta version of its Analyze Boston initiative, a data platform that gathers data sets from various city sources and lets citizens and authorities search through the open data, StateScoop.com reports. Within the platform, citizens can track specific data sets, discuss them online and use digital tools to interact with the data, according to State Scoop and a news release.

The city intends on using Analyze Boston as its default technology platform to publish its public data, despite still being in beta mode, according to the news release. OpenGov Open Data, the solution Analyze Boston is built on, is built on the same open source data standard that the federal government and the European Union use.

“Our goal in creating the Analyze Boston platform is to better fulfill the promise of open data and open government, by seeing open data not just as a collection of datasets but as a platform for sharing knowledge,” Boston Chief Data Officer Andrew Therriault said in a news release.