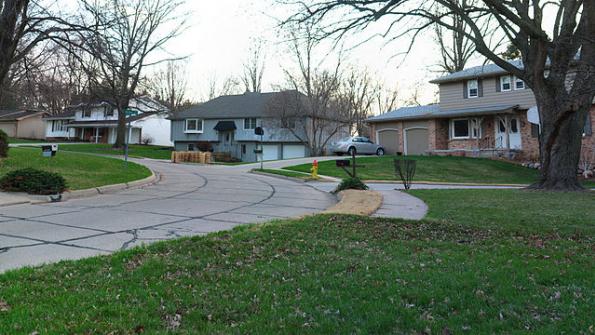 A large portion of Omaha’s streets are in disrepair and not up to city standards, But while citizens have raised complaints about their neighborhood streets, city officials are mostly choosing only to repair the city’s major thoroughfares.

A large portion of Omaha’s streets are in disrepair and not up to city standards, But while citizens have raised complaints about their neighborhood streets, city officials are mostly choosing only to repair the city’s major thoroughfares.

The Omaha Public Works Department estimated that there were 350 miles of unimproved roads in the city, according to KMTV. The cost of repairing such roads is not cheap.

"I think it's safe to say we're going to be over $250 million for the alleys, and the neighborhood streets we’re talking about,” Omaha Public Works Department Engineer Todd Pfitzer told KMTV. “Some of the other streets are already programmed into the budgeting and capital improvement program.”

Many of those unimproved streets were asphalt roads that were constructed before roads were supposed to be brought to city standards, according to KMTV. Due to the city not maintaining them, many are beyond repair.

One group of neighbors off 113th Street found that the city had ground their street to a dirt road in 2014, the Omaha World-Herald reports. Once they realized after a while that they weren’t getting a new asphalt street, they expressed indignation to Omaha City Council.

Despite the council agreeing to devote $200,000 to repave the street, the road remains unpaved. Another group of neighbors living on 95th Street encountered a similar predicament.

Joe Skradeski, who lives on 113th Street, likened his stretch of street to a mud puddle, and told the World-Herald that he and his neighbors are not happy about the city’s actions.

“It’s not so much about my street, but it’s a policy failure,” he told the paper.

These aging streets can also be hazardous to vehicles.

“Drive down Grand Avenue in north Omaha from 48th Street to 52nd,” Omaha City Council President Ben Gray told the World-Herald. “If you still have tires left call me and let me know.”

Because the roads weren’t built to city standards and because major and minor streets alike are so prevalent throughout Omaha, the city considers the upkeep of these residential roads to be the responsibility of nearby property owners.

“The developer in the past made the decision to develop the street as an asphalt overlay,” Omaha Mayor Jean Stothert told the World-Herald. “Is it the taxpayers’ responsibility today to fix that decision? Or would they rather their tax dollars go to the heavily traveled major and secondary streets?

Despite the problems on residential streets, work has started to repair some of the more major streets across the city.

Still, some officials stay adamant about not repairing some of the more worn-down neighborhood streets.

“Do you repaint a rusty car?” Pfitzer told the World Herald. “You don’t. This is throwing good money after bad. We have to stop the bleeding.”

Meanwhile, citizens like Skradeski remain angry about the situation.

“Right now we’re living in misery,” he told the World-Herald.