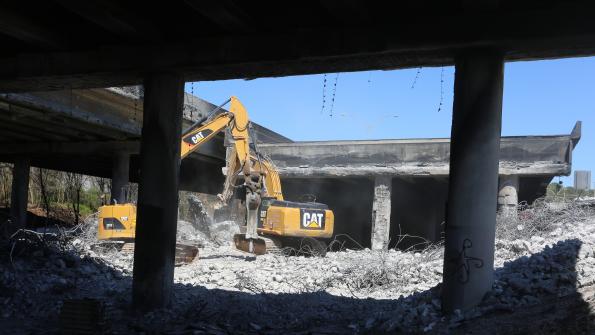 First responders, construction crews and the Georgia Department of Transportation worked feverishly and continue doing so to mitigate fallout from a major highway overpass collapse in Atlanta.

Around 7:00 p.m. on March 30, a heavily-used overpass section of Interstate 85 in Atlanta collapsed onto the road beneath it after a fire broke out an hour prior, CNN reports. No lives were lost, but the overpass was heavily damaged.

Soon after the fire broke out, firefighters arrived on the scene and almost immediately stopped car traffic when they sensed the heat from below and realized the bridge might collapse, according to CNN. Firefighters also began seeing chunks of concrete falling from the bridge and stopped pedestrian traffic below and beside the bridge.

“I believe that saved a lot of lives,” Sgt. Cortez Stafford, a spokesman for the Atlanta Fire Rescue Department, told CNN. “People were driving by, not paying attention, taking pictures with camera phones. “My guys put a truck in the middle of the interstate and said, ‘Hey you can’t go by.'”

The fire’s cause is still undetermined, as the fire broke out among plastic piping for cabling and fiber optic that authorities say isn’t combustible, according to the Atlanta Journal-Constitution. The day after the incident, state investigators arrested three people in connection to the fire. Authorities have said they interrogated the subjects and that all three might be homeless.

Authorities have said that three sections of southbound highway and three sections of northbound highway, including the collapsed section, will need to be replaced, Atlanta TV station WSB-TV reports. Since the collapse, crews have worked feverishly to repair the damaged sections. Already however, a section of Piedmont Road — where the bridge fell onto — has been reopened to the public.

“Construction is going to take some time. We really hope that the public will have some patience because it’s a big project,” GDOT Primary Engineer Bill DuVall said in a social media video update from Sunday, per WSB-TV. Officials have no official estimate on the repair timeline, but they predict the repairs will take several months, according to USA Today.

Georgia Gov. Nathan Deal declared a state of emergency after the collapse, USA Today reports. I-85 is a major artery leading in and out of the city — it’s estimated to carry about 250,000 cars per day.

“Despite our coordinated efforts, this will be a long process,” Deal said after meeting with transportation officials, per USA Today. “This is due, in part, to the fact that bridge beams must be cast, poured, tested, transported and individually installed. During this time, public safety is our chief priority and primary concern.”

The collapsed bridge was built in 1993 and had a sufficiency rating of 78, the Journal-Constitution reports. The rating aligns with the American Society of Civil Engineers’ C+ grade for bridges as part of its 2017 Infrastructure Report Card, which American City & County detailed here.