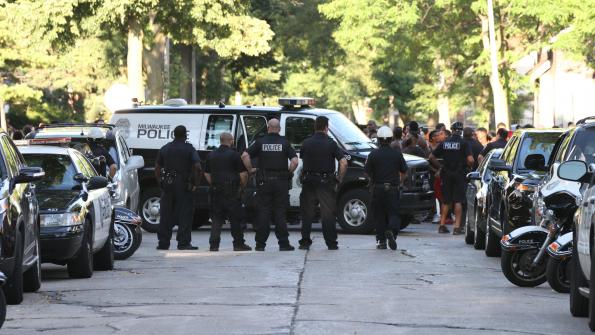 Police are increasing their precision when handling riots and protests.

Reactions to a polarizing election, publicized police-on-civilian violence and other political incidents provoked numerous protests and riots throughout 2016 and continue doing so in 2017.

Many traditional crowd management and control tactics continue to prove useful for police in quelling violence once it starts, and there are many ways to preemptively police such gatherings. However, in the heat of the action, some police departments are shifting towards more precision and restraint in controlling unruly crowds.

“If there were violent people in the crowd, they’d be attracted to the line,” Fomby says. “Then sometimes, there would be a confrontation.”

But simply wearing these turtle suits can antagonize a crowd. “I’ve seen that firsthand where donning those suits have antagonized,” Milwaukee, Wis., Police Department (MPD) Assistant Chief James Harpole says. “It’s an invitation to throw stuff at us.”

Moreover, if police try to control an already unruly crowd, some psychologists say such tactics can propagate more aggression.

“The basic problem with controlling a crowd is that the more police attempt to control the crowd, the crowd will become more unified, because that crowd identity becomes stronger,” says Donelson Forsyth, a social psychology professor at the University of Richmond specializing in group dynamics.

Police departments like Berkeley’s and Milwaukee’s are now opting for what Fomby calls a more “surgical” method of crowd control. He says officers in his department will monitor a crowd, identify violent or property-damaging people and ideally arrest them without using force against other protesters.

As a result, nonlethal projectile weapons are being used more frequently to address violent or vandalistic people from a medium range. Fomby says the BPD’s response teams use foam baton rounds — “basically a hard Nerf ball” — plastic projectiles that break on impact and marking cartridges that will identify targets with colored dye to better locate offenders in crowds.

The MPD’s major incident response team (MIRT) uses similar tactics when dealing with unruly protesters. Harpole says the team will follow a crowd on bicycles to ensure a “soft escort.” The MIRT officers will do so wearing standard police uniforms; if people increasingly throw objects at the police, they will slowly layer their uniforms with more protection, ultimately using the turtle suits as an absolute last measure.

Specially trained grenadiers in the MPD are also using more nonlethal projectiles in dealing with problematic people in crowds. Harpole says they used marking cartridges to mark agitators in handling the riots that overtook Milwaukee in August 2016. In doing so, police were able to remove those agitators and prevent them from further riling up the crowd.

“We in law enforcement and policing have come to really understand that special training for these officers in how to deploy and using the most [restrained] ops available will get us the best results,” Harpole says.

Jerry Harper, a consultant and lecturer on crowd riot control with over 47 years of riot control and law enforcement experience, agrees that a mobile field force that uses no more force than is needed to arrest people is essential to conducting proper crowd control.

However, he stresses that training commanders to clearly specify the rules of engagement while leading decisively yet flexibly is one of the most essential elements of handling crowd control well.

“If he or she does not [specify the rules of engagement], then they can expect the problems to develop like [what] occurred in Ferguson, in [Seattle’s 1999 riots] and in Baltimore [in 2015],” Harper says.

Preventing violence through engaging the community

Harper, Fomby and Harpole all agree that most protests don’t turn violent, and that there are several preventative measures police departments can and should take in advance to prevent the need to use such crowd control tactics. They stress that having dialogues with community groups who organize such protests and demonstrations is critical.

“It is absolutely essential,” Harper says. “You want to be able to trust the demonstration leaders, and in many cases if not most cases, you can. Because they want to have a peaceful demonstration.”

Through the MPD’s dialogues, Harpole says the department knows what such groups’ general patterns and practices are, what they’re capable of, and the active and passive ways they’ve conducted resistance in the past. “Knowing your group is critical to policing it,” he says.

That dialogue proved to be critical in handling Milwaukee’s August 2016 riots. Harpole says in the days after the riot’s initial violent night, city administrators and police met with community leaders twice, ultimately establishing telephone communications between police and the community leaders. The leaders present at the riot’s scene then relayed information to Harpole and other officers to recommend where, when and how much backup and resources the MPD should deploy.

“That worked really well,” he says. “We let those community members really try and negotiate with these agitators that were out there. I think that third night, we made no arrests.”

Likewise, Fomby says his department will reach out in advance to groups they know are having protests and demonstrations, and the police will then coordinate with them to direct traffic, facilitate arrests and generally allow the gathering to occur without disruption.

Ultimately, Fomby says, the police’s goal is to allow protesters and demonstrators to adequately express their First Amendment rights while the vigilantly upholding the peace.

“It’s always a balancing act,” he says. “People who are in charge and supervising that event are constantly evaluating the temperament of the crowd and deciding what they need to do next.”

View a research-based infographic describing how police and the public perceive each other by clicking here.