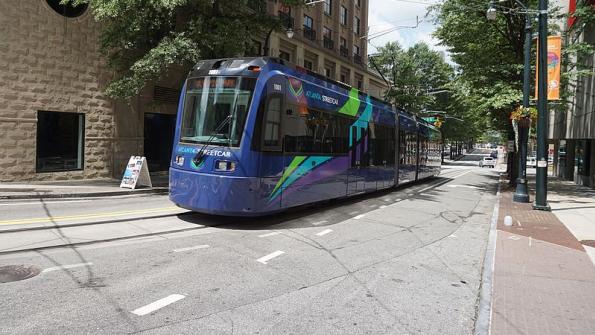 As cities across the country are anticipating improved transit by constructing streetcars, others are learning lessons.

As cities across the country are anticipating improved transit by constructing streetcars, others are learning lessons.

Earlier in February, Oklahoma City officials and residents celebrated the groundbreaking for constructing the city’s new streetcar, The Oklahoman reports. The MAPS 3 streetcar line will pass through the city’s central business district and take about two years and $131.8 million to construct. Construction is set to begin in the city’s Bricktown district.

Mayor Mick Cornett attributed the city’s previous streetcar system’s failure in the 1940s to moving towards a more automobile-centric culture, according to The Oklahoman. Cornett said that voters who approved MAPS 3 in 2009 saw the streetcar as a link to regional rail transit and a way to make the city’s bus system more relevant due to streetcar connections.

“The MAPS 3 OKC Streetcar is one of the most ambitious projects in Oklahoma City’s history, and it will forever transform the way we live, shop, work, play, eat and get around downtown and the surrounding districts,” Cornett said at the groundbreaking ceremony, per Railway Track & Structures Magazine. “We can expect to create memorable public spaces and increased private development like locally-owned shops, restaurants and more housing options.”

Milwaukee is also on track for beginning construction of a new streetcar system in April, the Milwaukee Journal Sentinel reports. The city issued an RFP for the streetcar’s eventual operator in advance of the construction’s beginning, while the first streetcar will arrive in December.

As the tracks will need to be welded together in lengths of up to 320 feet, the city has also designated five locations across the city to store the pieces during construction, according to the Milwaukee Business Journal.

“The locations were selected thoughtfully in order to avoid pulling those long track pieces around corners,” Milwaukee Department of Public Works Commissioner Ghassan Korban told the Business Journal. “Where they are stored they are aligned in the direction they are headed to.”

But not all new streetcar projects have been successful. When Atlanta began charging a $1 fee for their streetcar in the beginning of 2016, ridership dropped by almost 50 percent compared to the same time period in the previous year, Atlanta radio station WABE reports. Moreover, the city submitted plans to fix 41 safety concerns with the streetcar to the Georgia Department of Transportation last year, the Atlanta Journal-Constitution reports.

“It remains the Atlanta streetcar’s commitment to operate a safe streetcar system that is in full compliance with federal and state requirements,” city officials wrote in a letter accompanying the plans, per the Journal-Constitution.

“It is much more appropriate to continue to improve the service quality of the starter line we have here… and advance the project to Benning Road Metro so we have a comprehensive transit alternative, and at that time integrate a fare,” Dormsjo told WAMU.