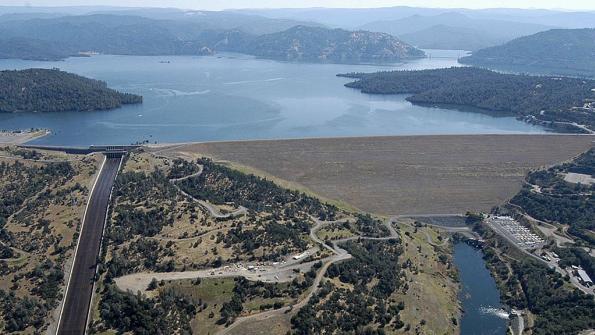 About 188,000 people near Oroville, Calif. were told to evacuate northern California on Sunday after a hole in the Oroville Dam's emergency spillway threatened the area with major flooding.

About 188,000 people near Oroville, Calif. were told to evacuate northern California on Sunday after a hole in the Oroville Dam's emergency spillway threatened major flooding in the area.

The Oroville Dam, the country's tallest dam reservoir reached capacity over the past week, and its main spillway was severely damaged, according to the Los Angeles Times. When dam operators reduced flows to the damaged main spillway, water reached the top of the untested emergency spillway for the first time in the dam's 48-year history, according to the Sacramento Bee. Storms and heavy snow prevented the operators from releasing enough water through the main spillway to prevent the reservoir waters from topping the emergency spillway's lip.

Spillways are safety valves designed to release water in a controlled manner to prevent water from flowing over the dam's lip, according to the Washington Post.

The National Weather Service announced Sunday that it expected the emergency spillway to fail just before 6:00 p.m. that day due to severe erosion, the Bee reports. That spillway's failing could have sent what the California Department of Water Resources called an "uncontrolled release of flood waters from Lake Oroville,” per CBS SF Bay Area.

An evacuation was ordered around 4:20 p.m. on Sunday, and was expanded to areas of Butte and Yuba Counties when the emergency spillway was expected to fail. Major arteries, minor arteries and highways leading out of the area to the north, south and west remained clogged through the night, the Post reports.

By 4 a.m. Monday, the reservoir's level had dropped to below the lip, according to the Post. However, approaching storms and the damaged water infrastructure could yield more danger in the immediate future, per officials. As a result, residents remained unsure when they would be able to return to their homes. Butte County Sheriff Kory Honea will not lift the ban until water officials better understand the dam's related risks, the Post reports.

“I recognize how tough this situation is on people,” Honea told the Post. “I recognize that we’ve had to displace a lot of people.”