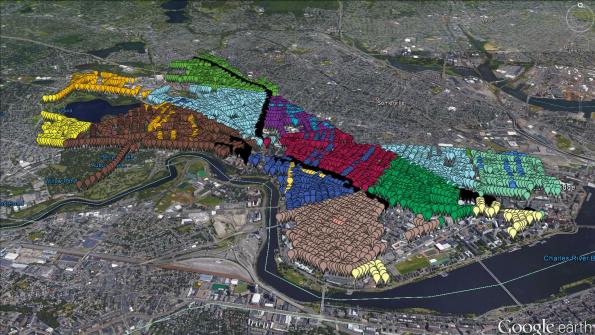 Cambridge Mass., has partnered with Echelon Corp. for an energy-saving lighting control system that was integrated with the city's new streetlight infrastructure.

In 2010, Cambridge Mass., launched its Sustainability Initiative, earning a Green City designation from the state. As part of the initiative, the city pledged to reduce CO2 levels, and an LED streetlight project was part of this goal.

The city partnered with Echelon Corp. for the lighting control system that was integrated with the new streetlight infrastructure. The wireless adaptive controls help capture energy savings. They also accommodate light level preferences of residents, giving city managers an easy-to-use management interface. City officials can adjust light levels with a simple keystroke. The system also increases safety on the city’s streets and sidewalks.

The upgrade replaced 4,900 cobra-type fixtures and retrofitted 2,100 decorative fixtures with LED fixtures. Fixtures included Lumewave by Echelon adaptive lighting controls and wireless control nodes that were connected to a network. This feature helped establish a central system for easy management of the streetlights. The retrofit and lighting control upgrade was completed in the summer of 2016.

The system enables light level adjustment of each fixture to an appropriate, location-specific illumination level. Dynamic adjustment is a primary benefit of the control solution in addition to energy savings. For example:

“As far as we know, we are the first major city to deploy an adaptive lighting system city-wide,” Stephen Lenkauskas, Cambridge City Electrician, says. “This has been an extremely successful process that has far exceeded our expectations and we’ve seen a savings of 80 percent (energy use) so far.”

In addition to the 80 percent reduction in energy consumption, Cambridge expects to realize annual energy savings of approximately $500,000, or a total of $10 million over the next 20 years.