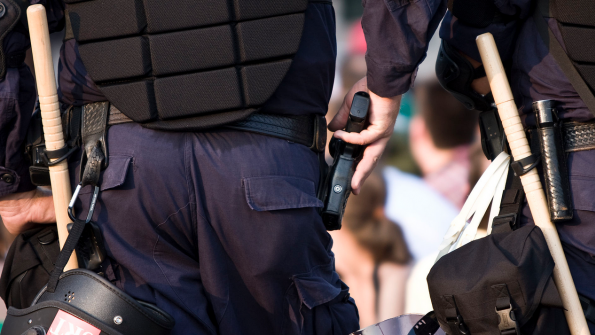 Art Acevedo, Austin’s police chief, has had it with misconduct in his department, but solving the problem seems to be an uphill battle.

Art Acevedo, Austin’s police chief, has had it with misconduct in his department, but solving the problem seems to be an uphill battle.

According to a special report titled “Forceful Talk,” published in the Austin American-Statesman, Acervedo, one of the nation’s most tenured major city chiefs, swiftly and public condemned the actions of officers during two use-of-force incidents – one involving the shooting of an unarmed, naked teenager and another where a teacher was violently arrested. The officer involved in the shooting, Geoffrey Freeman, was swiftly fired.

Freeman’s firing caused murmurs among the ranks, with officers questioning Acevedo’s dedication to his own force, according to the report. This led to a private meeting between Acevedo and his highest-ranking officers where the impassioned chief asked how anyone, much less one of the 18 commanders, could question his desire to hold officers responsible for their actions.

The meeting was secretly recorded by one of the commanders, and the tape was given to Tony Plohetski, the investigative journalist who authored “Forceful Talk.” Of the shooting and its fallout, Acevedo said:

“The union got all pissed off because I fired Freeman. Some of you might have gotten pissed off. I’m going to tell you right now, if we have another Freeman tomorrow, that is what’s going to happen. I didn’t lose a minute of sleep. If you can’t handle a kid in broad daylight, naked, and your first instinct is to come out with your gun, and your next instinct is to shoot the kid dead, you don’t need to be a cop. I don’t give a [expletive] how nice you are.”

Dash-cam footage of the incident in question revealed that David Joseph, a 17-year-old black male, ran naked towards officer Freeman, who drew his weapon and fired, saying he feared for his life. In a controversial move, Acevedo fired Freeman for excessive use of force. However, the police union has rigorously defended Freeman, saying it was reasonable to fear Joseph could have tackled the officer and possibly tried to take the officer’s weapon. An appeals hearing in which Freeman is seeking reinstatement is set for December, according to Forceful Talk.

Of the clandestine recording, Acevedo told the Statesman he was disappointed the officer “didn’t have the fortitude to have a face-to-face conversation when I have had an open-door policy my entire career.” He added, “My message delivered in a private setting was consistent with my message to the public and community.”

Acevedo’s attempt to change the culture of his department is an effort that has been in progress – in varying degrees of success – nationwide. While there is still pushback in many departments, various community policing programs like Coffee with a Cop, and changes in tactics and even equipment have attempted to bridge the divide between the police and their communities.

Like Acervedo, many top ranking officers are calling for reform. Former Commissioner of the Philadelphia Police Department Charles Ramsey penned an editorial in the New York Times in the wake of the recent Charlotte, N.C., riots. He says transparency and communication are both key in reestablishing trust.

“We need to focus on developing a national standard for how information such as police videos is released, and how prosecutors, politicians and law enforcement work together in a consistent and fair way.” Ramsey writes. “No one can be seen to be hiding information, or to try to cover up unflattering truth.”

Shifting police culture, and consequently the way communities view their police forces will be a difficult process, but a worthy one. And it’s one that starts at the top. “One of the toughest jobs as a police chief is to sell your program to the troops,” Michael Quinn, a former police officer and national law enforcement instructor, told the Statesman. “It takes time, and the police culture has a certain mindset on what is acceptable and what isn’t, and it can be very difficult to change.”

To read more about what’s being done to change police culture across the country, check out American City & County’s award-winning coverage here.