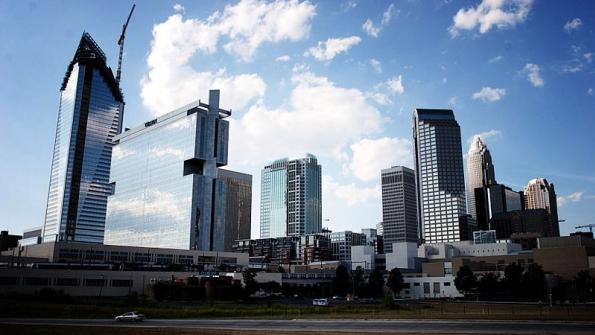 Charlotte's mayor's office, the city's police force and North Carolina State officials are all facing heavy criticism for the way they handled the aftermath of an officer-involved shooting which sparked riots locally and outrage nationally.

Charlotte's mayor's office, the city's police force and North Carolina State officials are all facing heavy criticism for the way they handled the aftermath of an officer-involved shooting which sparked riots locally and outrage nationally.

On Tuesday afternoon, a Charlotte police officer shot and killed Keith Lamont Scott while in pursuit of a different suspect, according to CBS News. As the riots started Wednesday night, North Carolina Governor Pat McCrory declared a state of emergency and ordered the National Guard to the city, according to WND.

Along with the National Guard, local and state police patrolled Charlotte’s streets, dispersing protesters with tear gas and rubber bullets, according to The Washington Post.

On Thursday night, Charlotte Mayor Jennifer Roberts issued a curfew from 12:00 a.m. to 6:00 a.m. beginning Friday and ending Monday, NPR reports. Law enforcement, public employees, journalists and other designated professions are exempt from the curfew, according to local TV station FOX 46. Once the protests turned largely peaceful, Roberts lifted the curfew, according to NPR.

Although the violence has subsided for now, criticism has been leveled against state and municipal officials’ responses to the situation.

Heavy criticism has been leveled against U.S. Rep. Robert Pittenger (D-N.C.), who told BBC Newsnight that the protesters “hate white people because white people are successful and they’re not,” the New York Times reports.

More criticism surrounds the handling of the police departments' video footage of Scott's killing. In a Friday New York Times editorial, the paper's editorial board criticized Roberts’ lack of immediate response regarding the police tape. Roberts said she planned to view the footage on Thursday, the Christian Science Monitor reports.

“[Roberts] seems largely at sea and distressingly out of touch with how lack of an open governmental response led to demonstrations in places like Ferguson, Mo., Cleveland and Baltimore. She said Thursday morning that she had not even viewed the video,” the Times Editorial Board wrote.

The city chose not to immediately releasing police video of the shooting of Scott, which ignited more uproar. While the murder occurred on Tuesday, a body camera-shot video and a dashboard camera-shot video were only released on Saturday after several groups, politicians, community leaders and protesters demanded that video evidence was released, The Times reports.

The North Carolina National Association for the Advancement of Colored People (NAACP) State Conference also asked the city to release the video, writing in a news release, “We call for the full release of all facts available. We ask that the city of Charlotte be transparent with any video and any additional information held by the city that can bring light in the tragic death of Mr. Keith Lamont Scott.”

The Times editorial board praised the Tulsa, Okla. Police Department’s decision earlier last week to promptly release its video of the fatal shooting of a black man in the city, but it had harsher words for the Charlotte Police Department, saying the department responded in “exactly the wrong way.”

“There is no legal reason to withhold the video from the public, and in this fraught situation, the best way to allay the community’s distrust is complete transparency,” The Times editorial board wrote.

While Charlotte-Mecklenburg Police Department Chief Kerr Putney ultimately decided to release the videos, he said they couldn't provide definitive evidence alone to the situation, according to The Times.

“People can interpret anything they want based on one piece of evidence, and I can tell you, I suspect they will based on the video footage," Putney said at a news conference, The Times reports. "But what I say is, you have to put all pieces together.”