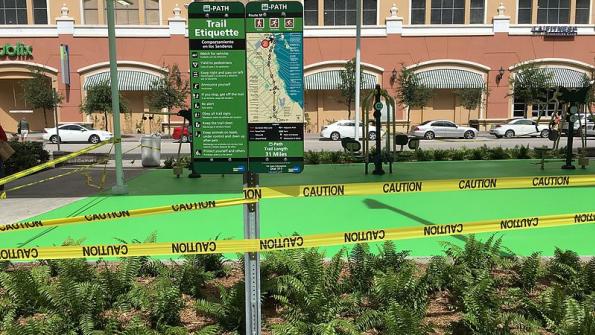 Miami city officials have pledged to funnel $50 million towards an urban park that will go underneath the city's Metrorail.

The Miami government is contributing up to $50 million to a development project that will put an urban park underneath the city’s heavy rail system.

The park, called The Underline, will consist of a 10-mile “linear park, urban trail and living art destination” that lies underneath the Miami Metrorail, according to the project’s official site.

"By taking advantage of green space that is already underneath the tracks, we have an opportunity to, with a very cost effect way, produce a greenway and park space that people can actively pursue,” Miami-Dade Parks, Recreation and Open Spaces Director Jack Kardys told local TV station NBC 6.

Miami-Dade County and city officials inked the deal on September 6, according to MiamiToday. The county owns the land underneath the Metrorail, which is about 100 feet wide and runs 10 miles. The city had previously allocated $200,000 to the county last year to fund the Underline’s master plan work.

As part of the agreement, the city will fund 40 percent of the $120 million project, according to the Miami Herald. The money will come from development fees from projects built within 1,000 feet of the Underline within the city limits. The agreement is to last six years.

Part of the project’s goals are to improve connectivity, bicycling safety and mobility for Miami-Dade visitors and residents, MiamiToday reports.

“That is probably the best way for us to get a significant amount of park space for a reasonable amount of money,” Miami City Commissioner Francis Suarez told the Herald. “I think it’s going to attract people not only in the city … but from all over the world.”

About $67 million of the funds will come from private sources and other public funds, The Real Deal reports.

“We just put the foundation of the house down,” Friends of The Underline CEO Meg Daly told the Herald.