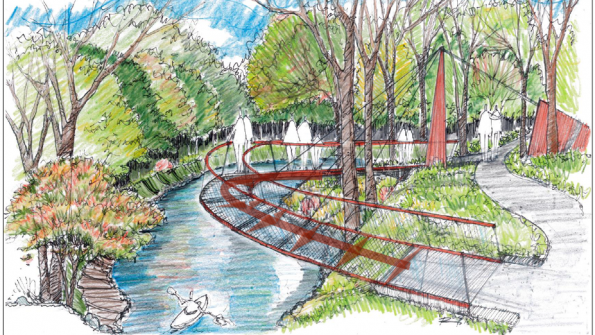 Rochester Hills, Mich.’s mayor tells GPN that 2016 is shaping up as another year of significant investment in the city’s infrastructure. “However, unlike the past several budgets where our focus has been on roads and sewer projects, we are shifting our attention to advancing many previously tabled green infrastructure projects,” says Mayor Bryan K. Barnett.

The mayor (photo at left) offers an example: “We are developing the city’s first new park, Riverbend Park, in over 20 years. A private million-dollar donation is spearheading development. Parks and green spaces are the top priority of our residents and our budget in 2016 reflects that.”

Funds from parks millage enabled the city to buy the land for the park in the mid-1990s. The city is reaching out to friends, sponsors and foundations to raise monies to develop the park and make it a reality. The photo below on the right displays the natural beauty of Riverbend Park.

“The park is on it’s way to becoming a unique regional destination where residents will be able to enjoy the great outdoors while improving the overall health of our community. Our design team integrated input from our residents with ecological considerations and thoughtful site design to formulate a preliminary program for Riverbend Park,” the mayor tells GPN. Go here to view the Riverbend Park strategic framework plan.

In the second half of 2016, look for more government investments in Geographic Information Systems (GIS). “GIS is becoming a crucial element for government — it is no longer a nice to have, it is a must have,” says Emma Finch, industry marketing manager for Cary, N.C.-based Dude Solutions. The company provides cloud-based operations management software to optimize facilities, assets and workflow.

“Many local governments are already investing in GIS, and that will increase as the visualization offerings become a central hub that everyone taps into and uses to collaborate,” Finch tells GPN. She notes that the data behind the solutions is something that many different departments need for various applications. That data, she adds, helps those departments work together in a more seamless way.

Finch cites this municipal application for GPN: “Police and emergency services need to work with GIS to make connections between seemingly disparate data points. For example, does more crime happen where there are less streetlights? And if that’s the case, does public works need to undergo projects to alter high crime areas to change that behavior?” In a recent report, analysts at Onvia, the government market intelligence firm, named GIS as a hotspot for growth in government contracts in 2016.

Esri, the provider of GIS technology, is empowering local communities to identify, protect and connect nature’s network and available greenspace. The firm has launched the Green Infrastructure for the U.S. initiative. It is a suite of public mapping tools and data to help communities protect the places and natural resources that help people, wildlife, and the economy thrive.

On the budget front, Onvia’s “State & Local Procurement Snapshot – Q2 2016” reports that In the second quarter of 2016, the number of contracting opportunities in the government SLED (State, Local and Education) market decreased slightly. The report notes, however, that budgeting at state agencies and for government technology continue in a growth direction.