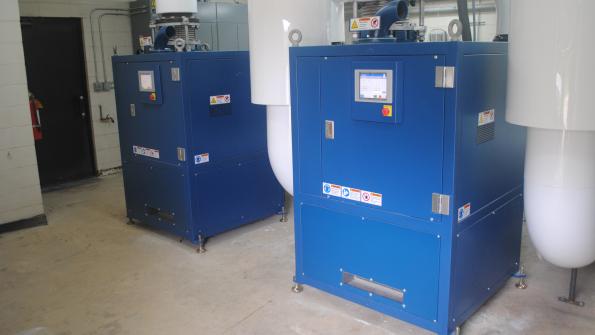 The wastewater treatment plant in Fredericksburg, Iowa, has replaced the two original centrifugal blowers in the plant with two energy-efficient Aerzen turbo blowers.

The wastewater treatment plant (WWTP) in Fredericksburg, Iowa (population 927), has been in a state of transition. In recent years, a major industry left the community, while two other manufacturing production facilities moved in. The industry changes significantly altered the WWTP’s influent wastewater characteristics.

As a result, the WWTP has been modified to allow a much more versatile range of operation. The plant can operate as an aerated lagoon facility (continuous discharge), a controlled discharge facility, or a no-discharge facility (effluent to irrigation use only). The plant’s operations and its potential effects on the environment make the plant highly distinctive for the Hawkeye State.

Because of the plant’s operational flexibility, Fredericksburg officials used electricity consumption as a basis for controlling the WWTP’s aeration blowers. Given that blowers are often the most significant consumer of power at a WWTP, there was a need to find a balance between controlling electric costs and providing sufficient air to maintain proper treatment of the wastewater.

As the two original blowers approached the end of their useful life, Fredericksburg worked with its engineer, Fehr Graham, to replace the two original centrifugal blowers with two turbo blowers (Aerzen model TB150-0.8S). “Even though the capital costs were higher, the city and its taxpayers would see the benefit in the long run,” says Ray Armbrecht, Fredericksburg’s WWTP operator.

The new blowers were installed in the summer of 2014. The turbo blowers provide the same aeration capacity as the original blowers but draw just 130 horsepower compared to the original 200-horsepower centrifugal units. They are also able to more efficiently match the blower output to the WWTP’s oxygen needs. “Because of the increased efficiency of the Aerzen blowers, we now provide air to the lagoons 24 hours a day, seven days a week,” Armbrecht says. “Providing a continuous supply of air has also eliminated odor problems, an added benefit due to our close proximity to a golf course.”

With the new blowers in operation, the city has documented significant reductions in electrical demand rate and total energy used. “We are seeing over a 30 percent reduction in electricity demand,” says Cindy Lantow, City Administrator. “Even though the blowers are now operated continuously, we expect the new blowers to continue to provide a savings of nearly $30,000 per year in electricity costs.”