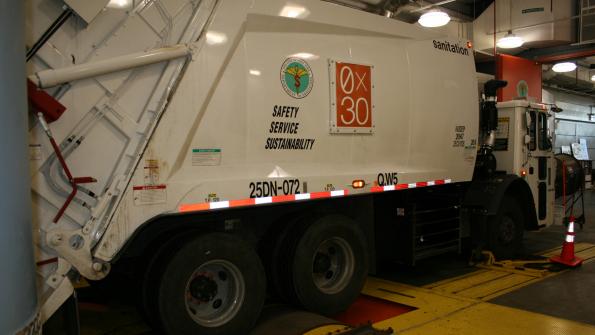 New York City's municipal refuse fleet relies on biodiesel to fuel a growing number of its 4,000-plus diesel vehicles.

No other city has a larger municipal refuse fleet than New York, and when it comes to fueling the 4,000 plus diesel vehicles, the city’s Sanitation Department trusts biodiesel.

“We were already a leader in using other renewable fuels when biodiesel started gaining popularity in 2006,” says Rocco DiRico, Deputy Commissioner of Support Services (photo below on right). “We wanted to gain experience with biodiesel, so we launched a 5 percent blend at one location in about 40 vehicles. It performed extremely well, so we decided to go citywide with B5 in 2007.”

The move to biodiesel was spurred by the city’s initiative to reduce overall fleet greenhouse gases and improve the air quality for local residents and visitors. In fact, New York City Mayor Bill de Blasio set a goal of reducing the city’s carbon emissions by 80 percent by 2050 against a baseline set by 2005 emissions.

According to the U.S. Environmental Protection Agency (EPA), biodiesel reduces carbon pollution by as much as 86 percent compared to petroleum diesel. Biodiesel is also the only alternative fuel to voluntarily complete EPA Tier I and Tier II testing to quantify emission characteristics and health effects. In short, biodiesel reduces smog and other harmful emissions, making the air healthier to breathe.

But none of the clean air benefits would be as worthwhile if biodiesel did not power the city’s vehicles and machinery as effectively as petroleum diesel. DiRico says that since the department’s original experiment began, fleet managers have had no warranty claims denied, no fuel system or engine damage, and no downtime of equipment as a result of biodiesel use.

“We can’t afford for our garbage trucks not to run,” DiRico says. “Our trucks don’t only pick up garbage. They are also equipped with snowplow hitches. We’re a part of the city’s snow emergency plans and the residents of New York City would not be too happy if our vehicles went down during a snow storm.”

Click here to learn more about the National Biodiesel Board.