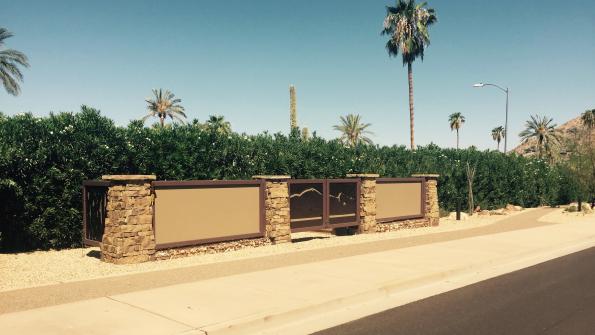 On the eastern side of Phoenix, the town of Paradise Valley, Ariz., is a destination for some of the best golfing, hiking, dining and leisure activities in the Southwest. In an effort to embrace pedestrian/bicycle activity, as well as promote the scenic views of several mountain ranges that the town has to offer, Paradise Valley began redeveloping the corridors that connect the southern and northern sides of the town.

As plans for the corridor construction began to develop, civic leaders recognized that they needed to develop a design standard that would not only service the first corridor, but would establish brand standards for all future environmental and functional graphics within the city limits. National Sign Plazas, a developer of wayfinding signage, civic branding and economic development for cities and towns, was selected to develop a design standard.

Leaders decided that the design should feature the natural colors found in the Desert Southwest.  In addition, it was decided that the signage should be able to resist harsh weather conditions and that sustainable materials be used in the construction of the signs. Leaders envisioned that all plan components would work together to create a unique and integrated look throughout a number of locations.

The first Visually Significant Iconic Corridor (VSIC) was transformed from a dedicated vehicular passage to one that also protects routes for walking, cycling and golf carts. The VSIC included three different nodes (manicured focus areas within the corridor) that were designed as decorative enhancements and educational opportunities within the corridor.

National Sign Plazas worked to develop several different wayfinding elements (see image below on left) that included directional concepts for pedestrians and motorists, as well as educational and architectural concepts that were included throughout the VSIC. Additionally, the wayfinding plan included a hybrid concept that replaced a standard street sign with a more decorative directional sign. The primary node is the key feature of the VSIC. It incorporates a vast shade structure that protects the node as well as planned, educational space where passersby can learn about the nature and history of Paradise Valley.

As a central tourist destination for the Phoenix-area, Paradise Valley attracts more than 7,000,000 visitors each year. As the city continues to evolve, these corridors will serve as a staging platform for pedestrians and cyclists to explore all of the activities Paradise Valley has to offer. Further, the VSIC network will help to define and elevate Paradise Valley’s civic brand message.

The first Visually Significant Iconic Corridor was completed in August 2015 and plans to transform the parallel corridors are already underway. Once completed, the group of five corridors will sync together to create a network of multi-use paths for citizens and tourists to explore the hotels, restaurants, golf course and outdoor activities within Paradise Valley.