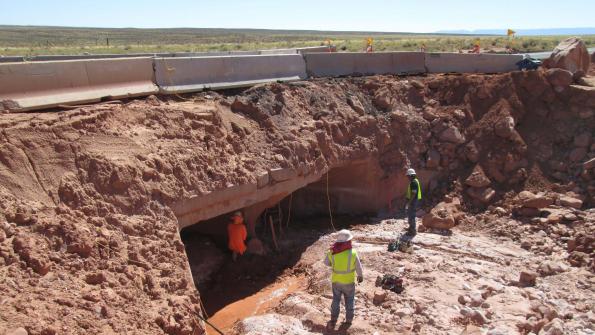 A 200-year monsoon dumped as much as 1.7 inches of rain on House Rock Valley, Ariz., in August 2015. Torrents of water damaged the roadway and culvert system designed to channel flash-flood rains under the highway. When skies cleared, the Arizona Dept. of Transportation (ADOT) was tasked with removing tons of sediment that ranged from silt to 15-foot-diameter boulders so repairs to the roadway and drainage system could be completed.

Just 11 days after submitting the price proposal through a Gordian Job Order Contracting (JOC) process, the contractor, S.J. Anderson, began work. Time was of the essence, with a section of the roadway limited to one lane, even as tourist season increased traffic volume. As a result, around-the-clock traffic control was needed throughout the duration of the project. The threat of another monsoon loomed as well.

Due to the remote location and lack of local crews with heavy highway repair experience, S.J. Anderson had to bring in crews and construction equipment from locations as far away as 500 miles. Dozens of tasks were completed at the 7 repair sites, including:

In all, the contractor completed emergency repairs at seven sites along 24 miles of U.S. Route 89A. The $1.6 million project was completed in less than a month.

By using the JOC solution from Gordian, ADOT was able to quickly re-open U.S. Route 89A by securing qualified local contractors while also following state and federal procurement laws and codes. The JOC process also ensured that labor and material prices were firm.

JOC expedites renovation, alteration and new construction jobs by allowing governments to complete a large number of projects with a single, competitively awarded contract. JOC simplifies and streamlines the construction procurement process, according to the company.

Click here to learn more about The Gordian Group.