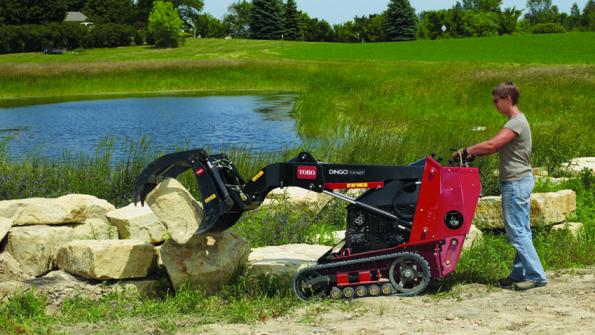 The evolution of the compact utility loader

Toro now offers nine models of compact utility loaders. Choose from the wheeled 220 all the way up to the TX 1000 wide-track model.

The year 1995 was when the compact utility loader (CUL) was introduced to American jobsites. That is when the Dingo, an Australian-built, wheeled mini-skid steer loader made its way to the United States.

Its initial popularity in the U.S. proved that there was indeed a market for compact utility loaders and drew the attention of The Toro Company. While the Dingo unit was beginning to make a name for itself, Toro acquired the rights to the Dingo machine in the U.S. and began developing a 19-horsepower tracked unit that featured Toro’s control system and a walk-behind design.

Due to the initial popularity of the product line, the company expanded its operations and dedicated an entire division to the compact utility loader — the Toro Sitework Systems division. At the same time, manufacturing of the Dingo product line was moved to the company’s facility in Tomah, Wis.

The rest of the history of the Toro Dingo has focused on continuous improvement. In 2000, Toro introduced the TX 420, the first tracked, walk-behind Dingo machine. Two years later in 2002, the Dingo TX 425 was introduced to the marketplace. In 2006, Toro provided yet another tracked Dingo model, the Dingo TX 525, which featured a higher rated operating capacity and a number of operator-centric upgrades.

Since 2006, other upgrades have been incorporated into the entire Dingo product line. In 2015, Toro introduced the powerful Dingo TX 1000, which features a vertical lift loader arm design and a hinge pin height of 81 inches. With a rated operating capacity of 1,075 lbs. on the wide-track model, the TX 1000 offers a rated operating capacity that rivals that of many skid steer loaders currently available in the market.

The company now offers nine models of compact utility loaders. From the wheeled 220 all the way up to the TX 1000 wide-track model, there is a Dingo unit for most applications. In the photo to the left: a Toro Dingo CUL with trencher assembly.

The Toro Company is a global provider of products for the outdoor environment including turf, snow and ground engaging equipment, and irrigation and outdoor lighting solutions.

Editor’s note: Content for this item provided by The Toro Co.

In the video, learn some of the features of the Toro Dingo TX 1000.