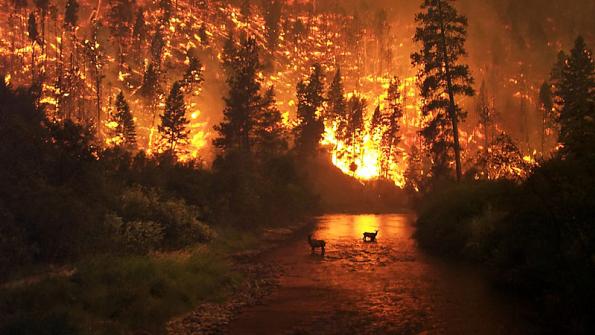 Massive wildfires continue to scorch swathes of North Carolina and Virginia as firefighters battle the flames.

Massive wildfires continue to scorch swathes of North Carolina and Virginia as firefighters battle the flames.

While authorities say over half of the inferno is contained now, a major wildfire in Dare County and Hyde County has so far burned over 15,000 acres, the Virginian-Pilot reports. Over 200,000 gallons of water have been dumped, and over 150 firefighters work to extinguish the blaze.

The fire, which the Associated Press reports was caused by highway maintenance work, spurred the closure of a section of U.S. 264, which has since been reopened. The U.S. Fish and Wildlife Service reports that the wildfire was first spotted as two small fires on Monday, April 18.

Elsewhere in Shenandoah National Park, a wildfire has consumed over 8,950 acres, according to the Cavalier Daily. While rangers do not fully know the cause of the fire, they suspect humans to have caused it.

Unique challenges in fighting this particular fire have arisen due to the topography of the area, the paper reports.

“We can't just spray water on it to put it out like a house fire,” Shenandoah National Park Ranger Sally Hurlbert told the Cavalier Daily. “When the fire was first reported to us, it was already 70 acres, so we couldn't directly attack it. We had to indirectly attack it by trying to put a containment line around it using roads, natural barriers and constructed fire lines.”

Hulbert said that over 340 personnel from 33 states as well as officials from the Virginia Department of Forestry, the U.S. Forest Service, the U.S. Fish and Wildlife Service and the Bureau of Indian Affairs are working together to put out the fire. She said that the strategy right now is to keep it within the containment zone.

While comparatively small, another wildfire dubbed the Silver Mine Fire has so far scorched 3,000 acres in Madison County, N.C., the Citizen-Times reports. Firefighters have fought the fire since April 21, and now are combating this fire through burnout operations. These operations, which involve personnel applying fire to the forest floor in advance of a wildfire to eliminate fuels, led to a natural 500-acre increase in the fire.

Officials report that the fire is now 40 percent contained, but many trails in the area remain closed.