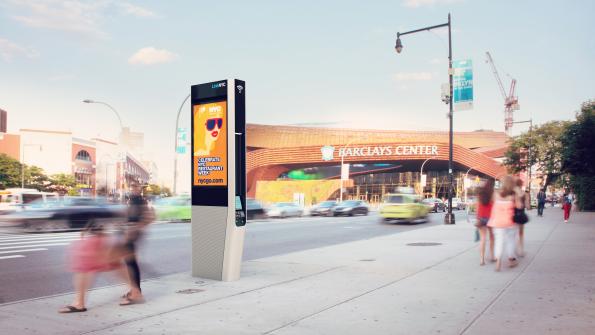 In 2016, searching for wireless networks at coffee shops and restaurants is a part of life. But these networks are still far from pervasive. On-the-go users often have to resort to eating into their data plans for mobile Internet surfing.

Various cities have attempted to bridge this usage gap for more than a decade with free public Wi-Fi plans, but have encountered various obstacles with funding, sustainability and growth. However, New York City has recently unveiled a possible new model for how these types of networks could succeed in the future.

Roughly 75 percent of New Yorkers currently have access to the Internet, but the de Blasio administration wants to bring that number to 100 percent by 2025 through the newly launched LinkNYC project. The aim is to provide free, high-speed Wi-Fi access to residents through thousands of Link kiosks converted from old payphones across the city’s five boroughs.

Each kiosk is equipped with a tablet for Internet browsing, and people can connect to the network from their own devices by registering with their email. The designers say LinkNYC will offer the fastest municipal Wi-Fi on the planet.

CityBridge, a group composed of experts in technology, media, user experience and connectivity, . The company has invested over $200 million to build hundreds of miles of new fiber optic cable, which will provide gigabit connectivity to the Links. “We’re starting with bandwidth that is built for the future,” says Jen Hensley, the general manager of LinkNYC. “Personal devices are the bottleneck on speed, they can’t handle gigabit yet. As devices improve, users will see greater and greater speeds.”

Providing fast Internet for the millions of New Yorkers currently without comes with a big price tag, which begs the question: Who will front the bill for such a sweeping project? Similar efforts across the country to provide free public Wi-Fi to city residents have been met with criticism in the past, because the projects are often paid for from the taxpayers’ pockets.

However, New York is attempting to create an alternative funding method. The project is designed to fund itself through a combination of advertising, sponsorships and partnerships in hopes of creating a sustainable model that doesn’t put a financial burden on its users. “LinkNYC will be supported by revenue from advertising, which is being handled by CityBridge,” according to a de Blasio spokesperson. “The network will be built at no-cost to taxpayers and generate more than $500 million in revenue for the city over the next 12 years.”

According to program materials, LinkNYC  is targeting all of New York’s residents and visitors by providing a range of services, including free phone calls to anywhere in the U.S., a charging station  and a secure touch screen tablet to access city information and browse the Internet. “We believe all New Yorkers should have access to the opportunities that the Internet affords,” Hensley says. “From kids who need help completing their homework to those who are job searching or just want to access videos and entertainment.”

Businesses and their customers can also access the Wi-Fi network, and affordable hyper-local ad options are available to the surrounding businesses. The kiosks are also designed to be tough enough for New York, built to withstand extreme heat and cold, rain, snow and flooding, earthquakes, vandalism and theft.

The network also offers the highest levels of security. LinkNYC provides encryption between devices and hotspots to keep all private information secure.

The project is a work in progress, but has the potential of providing Internet access to every NYC resident in the near future. Over 500 gigabit Links are projected to be installed by July 2016, 4,550 are planned to be in service by 2020, and at least 7,500 are anticipated to be checkered across the city’s streets by 2025.

“We see LinkNYC as an urban technology platform that will connect communities, visitors and businesses to each other and the city itself,” Hensley says. “This is a first of its kind network, and we think it could be a model for cities around the world.”