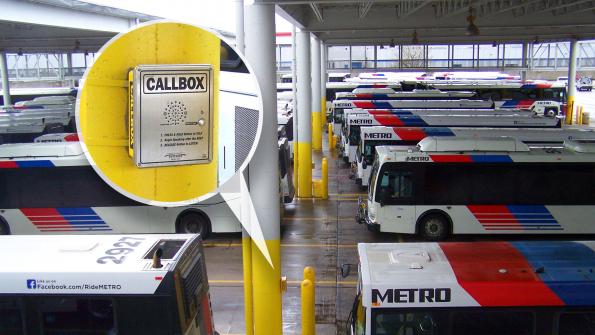 The Metropolitan Transit Authority of Harris County, Texas (METRO) recently found a way to keep their buses on schedule—for daily routes and maintenance.

The Metropolitan Transit Authority of Harris County, Texas (METRO) recently found a way to keep their buses on schedule—for daily routes and maintenance.

Derrick Blount, superintendent of the authority’s Intelligent Transportation Services (ITS), had 60 Ritron callboxes installed in the yards where buses are parked and maintained. The callboxes allow direct, real-time communication between driver and maintenance personnel, thus streamlining the morning and afternoon “pullout.” The units have helped improve on-time rates, according to the manufacturer.

METRO owns 1,262 buses, spread over seven lots. This means a lot of maintenance spread over a lot of acreage.

As a test, METRO purchased one callbox, in February 2014. They programmed it to their UHF radio frequencies and installed it in the largest garage. This helped to verify range and coverage through buildings and around the grounds. The system was fully implemented in early 2015.

“We found the UHF range sufficient, and we were able to install it easily — we just installed batteries and programmed it to match our system,” Blount explains.

“You could calculate the man-hours saved during the search, response, and repair of buses over some defined period of time. You can’t put a price on bus operator morale,” says Blount.

With easy access to direct, instant communication, the process is more efficient and streamlined. METRO is now able to better stick to its bus pullout schedule — to run on time and safely.