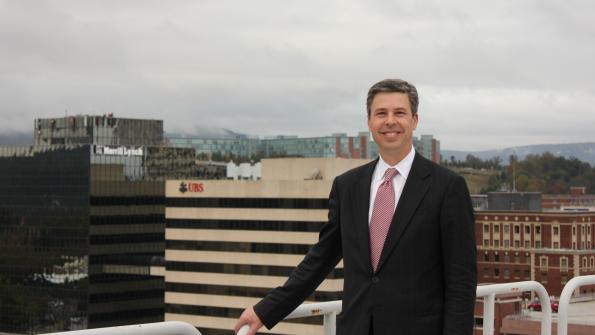 From Chattanooga to the Moon

For his extraordinary leadership and dedication to innovation, Chattanooga Mayor Andy Berke has been named American City & County’s 2015 Municipal Leader of the Year.

On July 16, 2015 disaster struck Chattanooga, Tenn. That morning, a gunman opened fire on two military installations in the city. First at a recruitment center, then at a U.S. Navy Reserve post. Four marines and a sailor were killed. A Marine recruiter and police officer were also wounded during the attack.

While the city reeled and staggered from the overwhelming grief, Chattanooga Mayor Andy Berke stepped forward to lead residents out of the darkness. “A truly great leader reacts to tragedy in a way that shares the burden of grief and, at the same time, shows the resolve and determination to stand strong and push forward,” says Steven Angle, Chancellor of the University of Tennessee at Chattanooga. “Mayor Berke led the city of Chattanooga through this tragedy – undoubtedly the darkest days we have faced as a community.

In the weeks following the shooting, Berke launched several initiatives to help rebuild the community’s spirit. Members of his staff helped organize formal services for the fallen as well as a tribute concert. While the final amount raised by the event has not yet been announced, the figure is expected to exceed $100,000 for the families of the victims. Berke was able to rally Chattanooga and cause its residents to come together in order to heal. “We stood together to show our collective character, which I believe was due, in large part, to Mayor Berke and his leadership during this difficult time,” Angle says.

However, Berke’s accomplishments extend further than his leadership during a crisis and ability to remain calm under extreme pressures. Under Berke’s guidance, Chattanooga has grown economically, culturally and technologically, going from a sleepy mountain town to a thriving center of innovation and progress. It is for these efforts that Mayor Andy Berke has been selected as American City & County’s 2015 Municipal Leader of the Year.

Beyond Berke’s crisis management skills, one of the most important ways he has impacted Chattanooga is through his efforts in establishing the city as a leader in the Innovation Economy. “Mayor Berke realizes that equity is necessary for Chattanooga to thrive,” says Angle

The network, though new, has many excited for the possibilities it will bring to the region, and the implications it may have nationwide. President Barack Obama praised the network, saying in an official statement that the high speeds will give the city a tremendous competitive advantage.

Another strategy Berke has utilized in establishing Chattanooga among the ranks of say a Boston, Washington D.C. or Palo Alto, Calif., is through the creation of Chattanooga’s Innovation District. 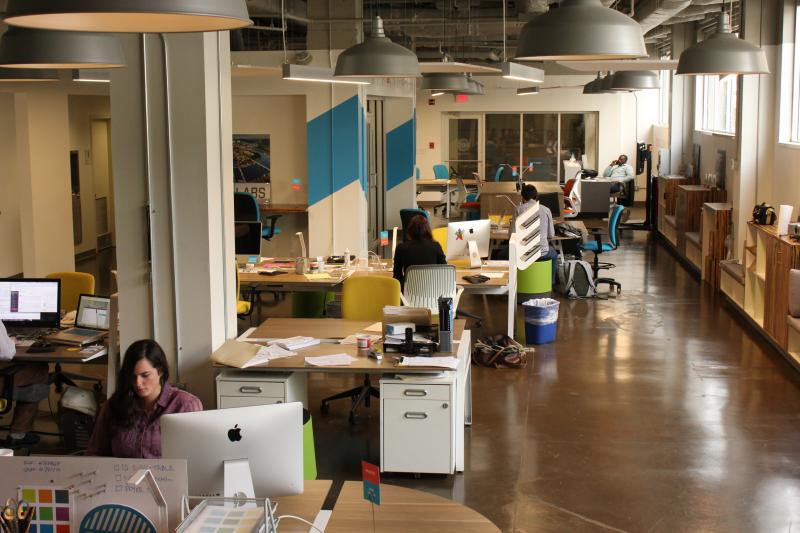 The Edney Building serves as the district’s focal point, support base and catalyst for the local innovation ecosystem. It is also home to The Company Lab (Co.Lab), a non-profit, start-up incubator with the mission of supporting Chattanooga’s entrepreneurial spirit, helping potential new business owners get their ideas off the ground.

Mike Bradshaw, Co.Lab’s executive director, says that Chattanooga’s dedication to facilitating creativity and entrepreneurship has led to its renaissance. “I think where this city government has really hit a home run here is that they recognize the importance of what this high-speed network represents for Chattanooga,” he says. “They’ve helped foster an atmosphere where the work that we can do proceeds, but they haven’t attempted to direct or control us in any way at all.”

That isn’t to say the city hasn’t been supportive, however. “Mayor Berke has been very generous with helping us in all kinds of ways, but without ever putting the hand of city government into it.”

One of Berke’s strengths, Bradshaw says, is his understanding that the private sector, particularly start-up entrepreneurs, operate using a different set of principles than city government. Rather than force the hand of private interests, Berke operates more as a facilitator.

“I guess that’s what makes Chattanooga what it is,” Bradshaw says. “It’s that people are willing to let experimentation proceed, willing to let people with a wild idea have their way and instead of saying ‘okay, now it’s time for the big boys to take over,’ saying ‘okay, what can we do to help.’ It’s a really interesting thing. I’ve never seen anything quite like it before.”

One of the most ambitious ideas coming out of Chattanooga currently, Bradshaw says, is work on lunar colonization. A Thiel Foundation fellow staying in the city was asked which problems will be facing not just Chattanooga, but the nation and even the world as a whole over the next few decades, and it was determined that work on a lunar colony could be a potential solution.

“In what other city?” Bradshaw laughs. “But you don’t invite the brightest young people in the world to come here to Chattanooga and ask them a direct question and then say ‘That’s not the answer I was looking for’.”

It may sound outrageous, Bradshaw admits, but Chattanooga isn’t a city that will say no to a big idea. Serious work is now being done on the project, including new methods of water and power conservation as well as more durable electronic systems. Bradshaw says that because of Mayor Berke’s entrepreneurial enlightenment, and through the connections he’s worked to create, the lunar team is now communicating with engineers from the University of Tennessee at Chattanooga.

And for all the lofty creative thinking and focus on non-traditional economic growth and innovation, Chattanooga is seeing very real returns. According to Angle, this past year, Chattanooga saw the third highest wage growth in the nation, and unemployment has decreased steadily from 7.8 percent to 5.5. “I believe much of this good news about our city is a product of the initiatives of Mayor Berke,” he adds.

Bradshaw agrees with this sentiment. “I think Mayor Berke has been as positive a force in the development [of Chattanooga] over these recent years as a mayor could ever be,” he says. “He represents that same kind of spirit that’s in our business community.”

However, Berke isn’t only interested in diving headlong into the future. He understands that sometimes a leader has to look back to make sure everyone is keeping up – including the city’s most vulnerable residents. Berke is committed to ending the problem of homeless veterans in his city, and is proud to report that since launching the initiative, the city is well on its way to ending the problem of chronic veteran homelessness.

Additionally, Berke is working to end the problems of domestic violence and sexual assault in the city. Launched in the summer of 2015, The Family Justice Center provides free services for the victims of sexual assault, human trafficking, elder abuse and domestic and family violence through partnerships with the city’s police, legal services and social service agencies in one convenient, safe location.

Additionally, the mayor has worked with the police force to create a dedicated sex crimes unit designed specifically to investigate and prosecute sexual criminals, and has joined with the University of Tennessee at Chattanooga to help stop sexual assaults on campus.

“I’m proud to partner with Mayor Berke on addressing this issue on our own campus,” Angle says. “Through our community agreement, Chattanooga police will coordinate even more closely than they have in the past with campus police to bring offenders to justice.” He adds that the Family Justice Center has also worked with the college to raise awareness and support victims.

However, it’s not just vulnerable adults Berke is looking to protect. The city’s youngest residents – its children and infants – are also a priority.

“Mayor Berke, even when he was a state senator, was always interested in education, particularly early childhood education,” says Donna McConnico, chief executive officer at the center. “He saw that we needed to do something to help families, especially those who might live in low income areas of our city, have the resources they need to help children get a good start.”

With the understanding that prevention of problems is always better than intervention, the idea for Baby University was born. The program operates in Chattanooga’s East Lake neighborhood, and helps 75 at-risk families, providing expectant mothers and those with small children with the resources they need to live stable, healthy lives.

Understanding the need for partnership when creating successful city programs, Berke formulated a public-private partnership between his office and BlueCross BlueShield of Tennessee. From there, McConnico says, it was decided that the program needed to employ the best and the brightest in the field of social work. “Our model is intensive case management,” she says. “We don’t want to start services that might stop later on; we wanted to connect people to services and we wanted to do that intensively.”

The services Baby University provides varies case-by-case basis, can include helping mothers find transportation, helping connect them with job placement services, providing nutritional information and connecting them with low cost supplies like diapers and prenatal vitamins. The point, she says, is to help mothers become self-sustaining.

The program has a rigorous evaluation process, and reports to the mayor every two weeks.

IN HIS OWN WORDS

From his actions in office down to his humble demeanor, it’s clear that Berke loves his city, and loves serving its residents.

Directly out of college, Berke worked for Bart Gordon, who, at the time, was the U.S. Representative for Tennessee’s 6th Congressional District. From there he went on to work for a federal judge out of state. Eventually, though, he came back to his hometown of Chattanooga.

“When I came back,” Berke says, “I got involved in the community, working with non-profits, trying to figure out how I could make the city better.” Finally, after working as a state senator, Berke felt he could make more of an impact as mayor. And make an impact, he did. When he got to office, he immediately started working to effect change.

“When I came into office, I was determined to really transform what city government was,” Berke says. “In week one, we totally reorganized the government. We eliminated four departments and started three new ones, taking the core functions that I believed were important to make the city run and putting them all in one place so that they made more sense.”

Once the city government was running more efficiently, Berke says it was time to get to work improving the city. “We were a city that held onto its past for too long,” he says. “We thought we would live in the age of foundries forever, and the world passed us by.”

But no longer. Under Berke’s guidance, Chattanooga has experienced a rebirth. From the innovation district to the beautification of parks to the redevelopment of struggling neighborhoods, Berke is proud of the progress his city has made.

“I now believe I live in the greatest mid-sized city in America,” Berke says, and it’s clear he means it.

Learn more about Mayor Berke and his work to make Chattanooga the best mid-sized city in America by watching his full interview below: