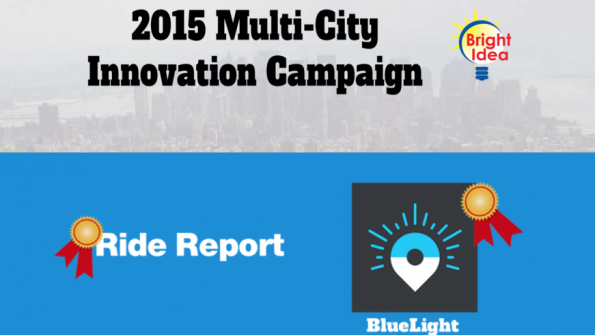 The National League of Cities (NLC) recently announced the two winners of its Multi-City Innovation Campaign – Bluelight, a mobile 911 app, and Ride Report, a smartphone app that collects and analyzes bike data, both efforts to will help cities partner with tech innovators to solve civic challenges.

The National League of Cities (NLC) recently announced the two winners of its Multi-City Innovation Campaign – Bluelight, a mobile 911 app, and Ride Report, a smartphone app that collects and analyzes bike data. Both efforts will help cities partner with tech innovators to solve civic challenges.

More than 20 cities voted on the top 10 finalists for the best civic tech solutions, according to an NLC statement. Ride Report and BlueLight will receive funding to launch pilot trials of their tech innovations in cities across the country, according to an announcement at the recent White House Smart Cities Summit. The pilots will launch next year in the following cities: Atlanta, Chattanooga, Tenn., Memphis, Tenn., Nashville, Tenn., Mountain View, Calif., Palo Alto, Calif., and Raleigh, N.C.

"When cities work together with partners in the private sector, we see amazing and innovative solutions to common challenges that many cities face," Clarence E. Anthony, CEO and executive director of NLC, said in a statement. "The Multi-City Innovation Campaign is a great way for our partner cities to see what new tech solutions are available and for the companies providing the solutions to get city feedback on their products."

The innovation campaign was developed by city employees in Nashville, Raleigh, Boston and Palo Alto in 2014 to serve as a platform to connect developers and community leaders with scalable solutions to better communicate with citizens better and resolve infrastructure issues. Earlier this year, NLC released the 2015 State of the Cities analysis of mayoral "state of the city" addresses, which revealed that economic development, infrastructure and public safety were the top three topics addressed by mayors.

Bluelight intends to bridge the gap in connecting 911 callers to their closest first responders. The first testing of the app will begin in Mountain View, Preet Anand, founder and CEO at Bluelight, said in an interview with American City and County. Anand thought of the idea for his app as a college student when he learned that 1 in 5 female college students are victims of sexual assault. Five years later, as an employee of technology company Zynga, he became more familiar with some of the communication challenges for those victims phoning into 911.

“Ten-thousand people are estimated to die every year because of this antiquated technology problem,” Anand said. “Cities previously haven't had a mechanism to affect this, but BlueLight now presents them with a choice designed for the digital age.  BlueLight's advanced routing, new interface and additional information provided creates a more effective response and will save lives.  Every city wants that for their community.”

Bluelight will initially work with public-safety answering points (PSAPS) and universities to test and perfect the app in its pilot communities, Anand said. Having the perspective from public-safety professionals and citizens will help Bluelight add more features in the future.

“We'll be focused on how we can provide more information to dispatchers, such as a caller's pre-existing medical conditions, and how we can connect other devices that citizens use,” he said. “More than anything else though, we're focused on growing awareness that change is coming and that it's for the better.”