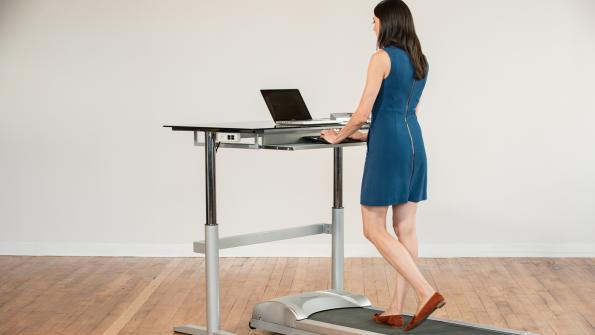 Workers are shifting to standing desks, based on the recent GPN-American City & County poll. About 39 percent of the poll respondents believe that more of their co-workers will be doing their jobs at standing desks in the future. A total of 314 web visitors to the site voted in the poll.

Joanna Stark, director of marketing & sales at Washington, D.C.-based Rebel Desk, weighed in with the following essay on the topic. The company designs and sells treadmill desks and adjustable-height desks to help people be more active while working. The photo below on the left shows a Rebel standing desk with keyboard tray. Below are Stark’s views.

Employers and their employees in all industries have realized that it isn’t possible to sustain current chair-centric lifestyle anymore. Most recently, it was found that 28 percent of Americans didn’t participate in a single physical activity for an entire year. Americans are working longer hours at more sedentary jobs than ever in history. The combination of these two forces is affecting our health and costing employers money. Health-related absenteeism among professionals costs the United States $24.2 billion dollars a year.

Because of this, standing desk and treadmill desk usage has increased dramatically over the last few years. Every day, government offices around the United States are making the shift to offering adjustable-height desks to their employees. Employers are excited to see that standing desks are a wellness initiative that actually sticks.

We polled our customers and found that 96 percent of those who have a Rebel Crank-Up adjustable desk for over five months still use it regularly. The adoption rate is significant when you compare this to a finding that 80 percent of people who join a gym quit going within five months. People stick with their standing desks because they find they are more productive and focused, have more energy, reduce their back and neck pain, and feel healthier overall.

Many employees are taking their standing desk to the next level by adding a walking treadmill. A treadmill desk lets people keep moving in an otherwise sedentary day. Often, offering a solution like a standing or treadmill desk ends up being a catalyst to health changes that employees have been planning to make for years.

We expect 2016 to be another big year for standing desks in the U.S. We predict that eventually all traditional sitting desks will be replaced with desks that can adjust between sitting and standing height. In the same way that smoking at work has fallen out of favor, one day sitting all day at work will as well.

GPN: Thank you, Joanna Stark, for your views on standing desks in the workplace.

In the video, learn how a treadmill desk can help you feel motivated, creative and productive at your job.