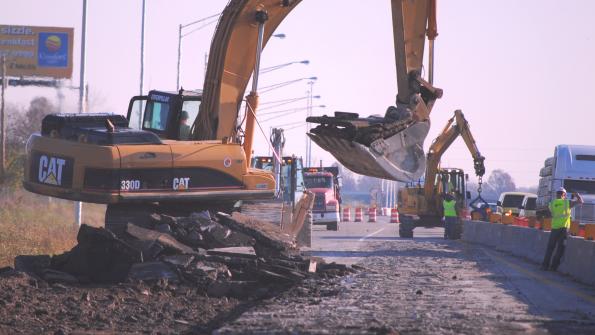 A mix-up on asphalt materials for more than 200 road projects in Indiana could mean a loss of more than $71 million for taxpayers and limit future highway funding for the state, an Indiana legislator said this week.

A mix-up on asphalt materials for more than 200 road projects in Indiana could mean a loss of more than $71 million for taxpayers and limit future highway funding for the state, an Indiana legislator said this week.

Indiana Department of Transportation officials are investigating 188 roads, which were repaved by 44 different contractors, that appear to have faulty asphalt mix, INDOT officials told the Indianapolis Star. State officials recently tested samples of $71 million in pavement projects at state laboratories. The testing uncovered that the asphalt mix appears to lack the sticky petroleum binder that holds asphalt together, which could mean the roadways will become cracked and corroded sooner than expected.

Testing on the roads continue, so no definitive conclusion has been made on the cause and whether contractors or INDOT is to blame.

"Our concern is did (contractors) include enough binder to make the pavement perform as it was intended," Robert Tally, INDOT deputy commissioner for materials and construction management, told the newspaper.

INDOT instructed contractors to use recycled asphalt, but recycled materials should not have caused deterioration of the asphalt sooner, Robert Tally, INDOT deputy commissioner for materials and construction management, told the Star.

"The recycled aspect of this was really born out of not taking material off of an existing road and disposing of it in a landfill," Tally said, adding that asphalt makers calculate the amounts of binder to add in the mix designs. "We are concerned that they have not done that sufficiently and accurately. Our perspective is that the mix design – the recipe – is their responsibility."

According to Indiana Public Media, legislators are already considering the costs that will go into possibly re-paving the hundreds of roads that could have been affected by the error. Decisions on funding the future road projects could also interfere with bipartisan consensus, Ed Soliday (R-Valparaiso), chairman of the House Roads and Transportation committee, told Indiana Public Media.

With a tight state budget, legislators will likely have to seek the public’s vote to approve further funding of the road projects, Soliday said. Taxpayers are already facing the state's need for $1 billion to maintain the current infrastructure, Soliday told the Indianalopis Star.

“If people don’t have confidence that money we spend on road funding is being spent well, then they won’t support additional funding, and I don’t blame them,” he said. “You keep digging to find out which it is. We are going to need a clear explanation for the public to move forward.”