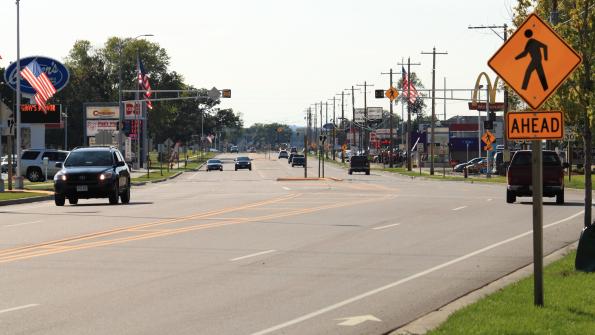 Sauk City, Wis., is home to numerous historic sites, including the original Culver’s fast-food restaurant and the nearly 200 year-old Stinglhammer home. However, getting to these places was becoming increasingly frustrating, and sometimes even dangerous.

Sauk City, Wis., is home to numerous historic sites, including the original Culver’s fast-food restaurant and the nearly 200 year-old Stinglhammer home. However, getting to these places was becoming increasingly frustrating, and sometimes even dangerous.

The main commercial corridor, Phillips Boulevard  (US 12), carries more than 20,000 vehicles per day, a figure projected to increase by 50 percent within the next 15 years. This 1-mile stretch of two-lane roadway with a two-way, left-turn lane (TWLTL) provides a regional link to Madison, the Wisconsin Dells, and Devil’s Lake State Park. However, its deteriorated pavement, lack of bicycle lanes, frequent congestion and large volume of turning vehicles compromised the safety of vehicular and pedestrian traffic. The boulevard has a crash rating that was 21 percent higher than the state average.

To accommodate projected traffic demand, the village hired Madison, Wis.-based Strand Associates to reconstruct the four-lane section from the Wisconsin River Bridge through downtown Sauk City. The design included an additional travel lane in each direction and it preserved left-turn lane access via a dedicated TWLTL. This decreased traffic backup onto the bridge, alleviated congestion and reduced turning traffic volume.

With many businesses and residential areas nearby, construction along the corridor had the potential to dramatically disrupt the community. One such attraction was the Stinglhammer home, built in 1852, which had been one of the oldest established breweries in Wisconsin. Instead of tearing it down, the construction staging plan maintained access to the house as well as the Meyer Oak Grove Park. The park is home to 200-year-old oak trees that were successfully accommodated through a meandering sidewalk layout that provides a scenic route for commuters.

After eight years of design, eight months of construction, and funding delays, reconstruction was completed in November 2013. “I have heard nothing but praise for the end result of the project,” says Tywana German, executive director of the Sauk Prairie Chamber of Commerce. “Left-turn access is much improved and the design was far better than we had hoped. … Strand was able to design a safe route that took into account our vision for our community. Enhanced lighting, crosswalks, tree-lined street, and park improvements have definitely improved residents’ and visitors’ first impression of our community.”

Strand Associates was established in 1946. The civil and environmental engineering firm serves the needs of public and private sector clients throughout the USA. The company has 11 offices located in Arizona, Illinois, Indiana, Kentucky, Ohio, Texas and Wisconsin.