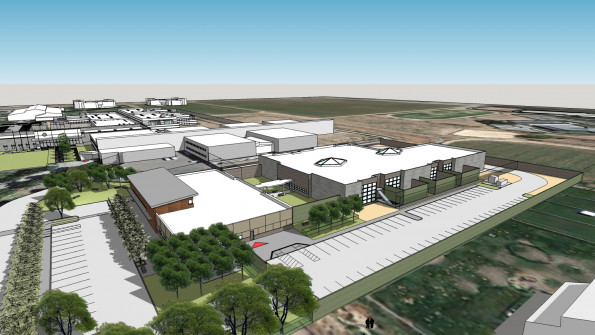 Designing with a purpose

Designs for social justice in cities and counties

Last November, as the St. Louis area was in the midst of civil unrest related to the death of Michael Brown, nearly 200 architects from around the country convened in St. Louis to discuss the impact of social justice on the design of criminal justice facilities. The conference was organized by the Academy of Architecture for Justice (AAJ), a knowledge community within the American Institute of Architects (AIA). Session topics explored the challenges that cities and counties are facing as they seek to reduce recidivism, improve outcomes and cut costs.

The criminal justice system in the United States is in the midst of a significant shift. Though crime rates across the country have declined over the past three decades, correctional populations have not. With state psychiatric hospitals closing around the country, the burden of treating the mentally ill has fallen largely upon correctional institutions. The prevalence of serious mental illness in jail inmates is exacerbated by the actual facilities, which often lack treatment resources and are characterized by constant noise, intense bright light and an atmosphere of stress. These elements are especially detrimental to the sensitivities of mentally ill inmates.

Architects are focusing on evidence-based practices that create restorative environments to support a facility’s mission of safety while leading to better outcomes and reduced recidivism.

Understanding that high rates of incarceration affect communities by disrupting lives and families, policymakers and citizens are seeking to focus resources on long-term alternative solutions that positively impact public safety. These measures include sentencing reform and diversion programs. Increased funding is crucial for locally supported services addressing public health, affordable housing, life skills and vocational training that is specific to the community.

As the changing views of society drive new program goals for incarceration, correctional facilities can no longer be considered impermeable outposts for warehousing criminals. The vast majority of inmates return to society and there is a growing expectation that inmates receive exposure to treatment and programming to prepare them for reentry and to reduce the likelihood of re-offending.

An example of this change is taking place in central California, where Stanislaus County is transforming its detention facilities. In 2007, California passed Assembly Bill (AB) 900, which sought to address healthcare deficiencies and overcrowding through the authorization of more than $7 billion in funding for state prison projects, reentry facilities and local jail beds. Senate Bill (SB) 1022, passed in 2012, provided additional funding for state and local incarceration facilities that offer adequate space for the provision of treatment and rehabilitation services, including mental health treatment.

1. Two maximum security units totaling 480 beds are being added to the Public Safety Center, along with a 72-bed medical/mental health housing unit, a clinic and security administration space. Funded through AB900 Phase II, this project provides much-needed secure bed capacity for local inmates and those from state facilities. Programming and recreation are essential for inmates with longer sentences, and both are provided in the new facility. The design minimizes inmate movement by providing programming in the housing units, improving both safety and efficiency. The addition of maximum security beds will allow existing units designed for medium security inmates to function more effectively.

2. A new facility is under construction to accommodate the intake, release and transportation of inmates.

3. A Day Reporting Center (DRC) will allow former inmates to meet with probation officers and also provide access to vocational training and programming. The DRC is a bridge to the community and serves as a primary interface between the public and the sheriff’s department.

4. A 288-bed transitional housing facility, the REACT (Reentry and Enhanced Alternatives to Custody and Training) Center, is currently being designed. The REACT Center includes classrooms and resources for inmates who are preparing for release. The design uses restorative principles, including abundant natural light, access to green space and expanded opportunities for movement within the secure perimeter. Evidence-based programs are intended to break the cycle of recidivism.

Correctional facilities are maintaining safety but becoming more transparent and permeable to the available resources in communities. This facilitates meaningful dialogues with the public. Society is inherently interconnected and our criminal justice system needs to reflect this.

Gregory Cook, AIA, LEED® AP BD+C, CCHP, is a senior project designer with HOK’s Justice practice and author of the blog Social Justice :: Design Exchange. In 2010, he became the first architect in the country to earn certification as a correctional healthcare professional (CCHP).