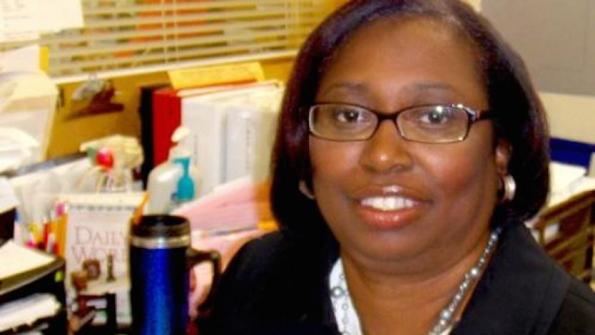 Cynthia Graham Hurd, one of nine victims of last month's shooting at Emmanuel A.M.E. Church, will be honored for her decades of service in the Charleston library system and beyond.

Charleston County, S.C., officials have renamed a library branch to honor the library and county service of Cynthia Graham Hurd, one of the nine victims of last month’s massacre at Emmanuel A.M.E. Church.

“It’s a small way that we can say thank you to a 31-year public servant who dedicated her life to teaching children and adults how to read,” Council Chairman Elliott Summey said in a written statement.

Hurd’s husband Arthur Hurd told The Post & Courier that the library renaming and outpouring of support for his wife, who would have turned 55 on June 21, has been overwhelming.

“People will look up and see her name and remember her every day,”  Hurd told the newspaper. “There have been nothing but good things said about her, because that’s how she lived her life.”

South Carolina Gov. Nikki Haley said the deaths of Hurd and the eight other victims on June 17 prompted her to remove the Confederate battle flag from outside the State House on Friday, according to the New York Times. The flag had flown there for over 50 years, but Haley and other government officials – both Democrats and Republicans – demanded the flag’s removal after what officials have deemed a hate crime at the hands of Dylan Roof.

In spite of the devastating way Hurd lost her life, the way she spent it will go on to impact South Carolina and the library community nationally, Courtney Young, American Library Association president, said in a written statement.

“The thousands of lives she touched over the years will serve as a lasting living legacy,” she said.

Hurd managed St. Andrews library and John L. Dart Library, where she spearheaded a children’s program and hired a children’s librarian, which had not been offered at Dart previously, Doug Hill, executive director of Charleston County Public Library, said in a statement.

In a 2003 interview with the Post & Courier, Hurd said she became a librarian to serve others.

“I like helping people find answers,” she told the newspaper. “Your whole reason for being there is to help people.”

County officials have not yet confirmed when a sign reflecting the new name of the library, located at 1735 N. Woodmere Drive, will be erected. The county has set up a fund to continue her youth library work. Those donations may be sent to Charleston County Public Library, c/o Cynthia Hurd Memorial Fund, 68 Calhoun St., Charleston, SC 29401.