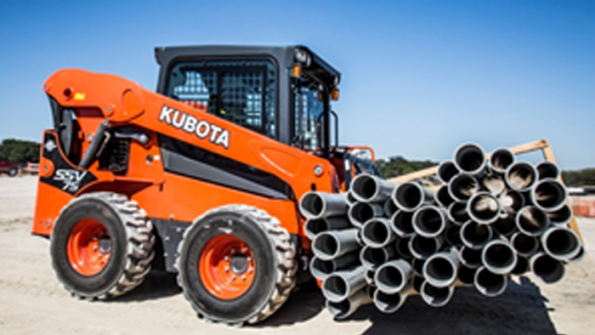 SSV models have a slide-up, front-entry door that rises overhead, instead of swinging out. The design allows the door to be opened regardless of loader position so that the operator can enter and exit the machine even when the skid steer is in a tight or difficult position. Other standard features include a spacious, dust-resistant pressurized cabin with climate control system, and a side light that allows visibility and safe operation at night. An optional multi-function lever feature is available, allowing for fingertip control of major machine and implement functions.

The models are easily serviced and maintained, according to the manufacturer. For example, the battery on the SSV models is positioned so that it is readily accessible for service and inspection; oil and fuel filters are placed in easy-to-access locations where drips will not leak on electrical components during changing; and bolt-on access handles were added to the cab so they can be easily replaced if damaged. In addition, the models have a fuel tank that is located in the rear door for quick, clean and easy refueling. The tank has enough fuel capacity to work all day, according to the manufacturer.

In the video, Kubota’s John Ryan talks about characteristics of the SSV75 and how it can be used in landscaping applications.