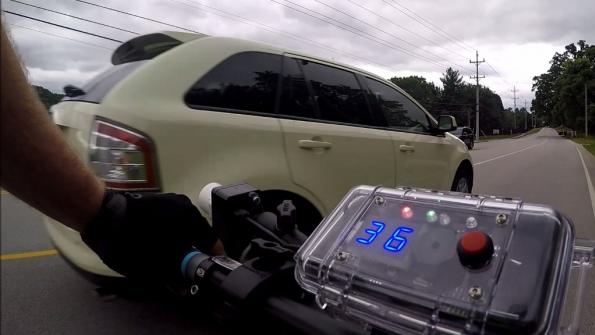 The Chattanooga Police Department is the first agency in the country to use the new device to better enforce passing laws.

The bike patrol officer’s friend, David Meek, died in a cycling accident in 2009 after a motorist failed to follow Tennessee’s “three-feet” passing law, which requires motorists to remain three feet from cyclists when passing.

“He got sideswiped by a vehicle trying to pass him,” Simmons told American City & County. “That really resonated with me.”

Simmons has led the effort for his police department to be the first in the country to utilize C3FT V2.0 – a bicycle-mounted passing detector system – that will better educate and enforce vulnerable road user laws, which apply to pedestrians, cyclists and others.

The C3FT uses an ultrasonic detector on an adjustable arm to measure distance between the bike mount and other vehicles. A numeric display, buzzer and LED indicators alert users when a passing vehicle reaches the preset distance threshold.

Simmons began using the device on patrol in May, and he has stopped more than two-dozen motorists that were passing cyclists too closely. He has not cited any drivers.

“Within the first 10 minutes of using it, a person (driver) came within 33 inches of my bike,” Simmons said. “We’ve had excellent results. I’ve called law enforcement agencies around the country, and they all say it’s impossible to enforce the passing law. You’re asking us to judge from afar and be accurate. If we go to court, you can’t prove it. It needs to be data driven.” 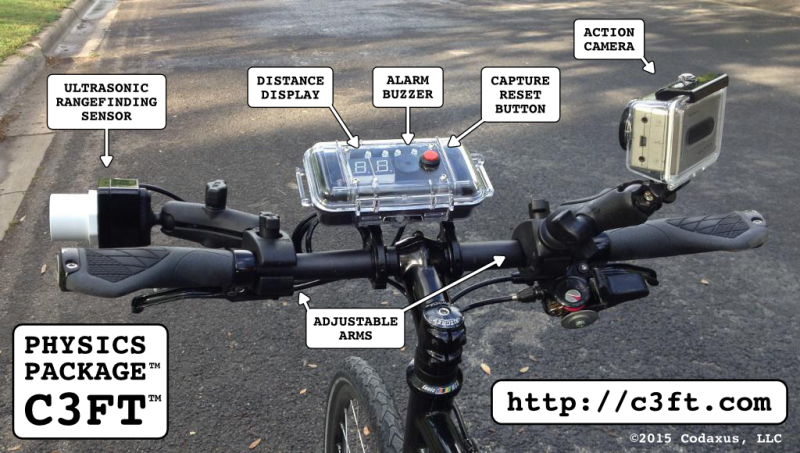 The C3FT has been tested and investigated by a handful of other county and city police departments to ensure the device is not only useful for statistics and education but also enforcement, Christopher Stanton, one of the developers of C3FT told AC&C. Stanton’s Austin-based startup Codaxus, LLC began developing the software and hardware for the device in early 2013. Stanton, who is also chairman of Austin’s Bicycle Advisory Council, initially developed the C3FT for research purposes.

“It was about getting statistics on driver pass and post-pass behavior,” Stanton said. “Most people don’t realize that if the lane is below 14-foot-wide, the bicycle can use that lane. It’s about drivers’ expectations. If they think a cyclist is doing something wrong, their behavior will show that.”

Stanton, as well as fellow C3FT developers Robert Kent and Jesse Duncan, originally worked with Austin Police Department Cmdr. Fred Fletcher to implement use of the device. When Chattanooga Police recruited him as chief, Fletcher charged Simmons with pioneering the case study on C3FT. Friends of Outdoor Chattanooga partnered with the police department by purchasing the $1,400 gadget for the police force, Stanton said.

“We would love to have it in every municipality with a vulnerable user law, Stanton said. “ Lots of folks are passing way closer than they think, so we have already succeeded in our main goal by bringing this educational component to monitoring passing laws.”