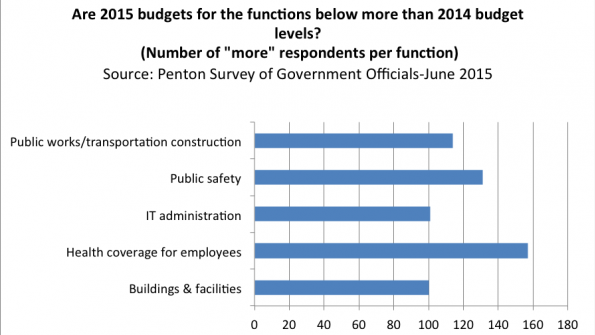 Several budget areas will get more funding in 2015 compared to 2014. An E-survey of GPN and American City and County readers shows that public safety, health coverage and road/infrastructure projects will all see bigger budgets in 2015. The survey question drew 316 responses.

Infrastructure is top of mind for the mayor in one Midwest city. “Rochester Hills, Mich., is working to aggressively deal with some of our longest standing challenges in this current fiscal year – our roads” says Mayor Bryan Barnett (photo below on right). “We have allocated more money to local road reconstruction in 2015 than any time in the past 15 years.” The population of Rochester Hills is 72,952.

Mayor Barnett says the city has been proactive in preparing for its infrastructure needs. In 2010, Rochester Hills was the first city in Michigan to incorporate a three-year budget in combination with a seven-year financial forecast. “This planning tool and innovative approach allowed us to grow our fund balance during the deepest recession in 80 years, and positioned us in the top 2 percent of Michigan municipalities for financial stability,” the mayor told GPN.

This year, Rochester Hills will spend over $30 million on road, water and sewer projects and the reconstruction of the city’s five fire stations with reserves on hand and without the issuance of debt. The city’s three-year budget is balanced until 2017, and no increase in taxes is required. “Cities that plan ahead and are disciplined in their approach are now finding themselves able to address their citizens’ most pressing infrastructure demands,” says Mayor Barnett.

In Gary Ind., city officials have awarded a $6.4 million citywide street paving contract. “We are especially excited to be able to do some extensive paving in the city this fall, which has not occurred in several years,” says Mayor Karen Freeman-Wilson (photo on left). She says that in an ideal world, the city would pave every street that needs it. “We know this is not the case, but the areas that have been identified will certainly make navigating our streets a bit easier.” The city is also in talks with neighboring communities to share in the cost of paving streets that have shared entryways. Crews are shown working on one of the city’s paving projects in the photo below on the right.

More roadway projects have been let in the Rockford, Illinois region to-date in 2015 than in all of 2014, says Mick Gronewold, P.E., a principal of Fehr Graham. His firm provides engineering, environmental, and funding solutions for commercial, industrial, institutional and government clients.

Publicly funded projects are taking off and moving full force into the second half of 2015, says Gronewold. “The start of major roadway work for the Illinois Tollway has begun at the western end of I-88 and continues in the Chicagoland area. In looking at the June and July letting for the Illinois Dept. of Transportation, road projects in the Rockford region will continue to be very active in the second half of 2015.”

The mayor points to two signs of progress on the city’s efforts to rein in legacy costs. “The implementation of a targeted capital improvement program has allowed us to address major needs, and continuing reforms to our employee health care program has resulted in a 25 percent reduction to the city’s OPEB (other post-employment benefits) liability.” New Bedford’s population is 95,078.