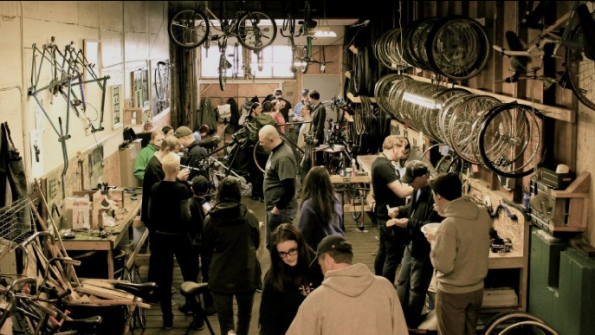 Sam Schwartz Engineering, a Chicago-based firm based, recommended a bike-sharing program during a recent Grand Rapids Parking Commission meeting as a way to reduce the number of cars in the city’s core, according to Mlive Media Group. The program will cost between $500,000 and $2 million for city park ramps and on-street bike infrastructure,

"Bike share is essentially a pedestrian accelerator that allows people to cover a larger walkshed in a shorter amount of time," the engineering firm consultant wrote in the report. "For instance, the walk from DeVos Place to Founders (Brewing Co.) is about 16 minutes for the average person; using bike share that trip would be reduced to 6 minutes.”

The Sam Schwartz recommendation calls for 20 to 35 bike share stations.

As the city announced recommendations for its bike-sharing program, SpokeFolks, a nonprofit devoted to cycling, launched SpokeFly, a bike share program similar to Uber, a ridesharing program for cars. SpokeFly users will be able to request a bike through their phone, the app will give a location and the user will unlock the bike from bike racks, according to the Grand Rapids Business Journal. A for-profit donor will front the initial costs of bikes and parking stations.

The Spoke Folks will manage bicycle maintenance and daily operations of the program. The program will launch with 66 bikes next month, but by spring, as many as 400 bikes could be shared across the city, Jay Niewiek, founder and executive director of The Spoke Folks, told the Grand Rapids Business Journal.

The key to successful execution of the bike-sharing program will be density and usage, Niewiek said. The bikes will have to be used at a rate of 12 minutes per day or more to turn a profit.

“We looked at national data around population density, how many bikes per thousand people, and we are right in the middle with the 400,” Niewiek told the newspaper. “If we find we are getting more people, we can add more.

“What’s nice about it being app-based, is we can look at where people are making their requests from, so we can put the bikes where the demand is coming from.”