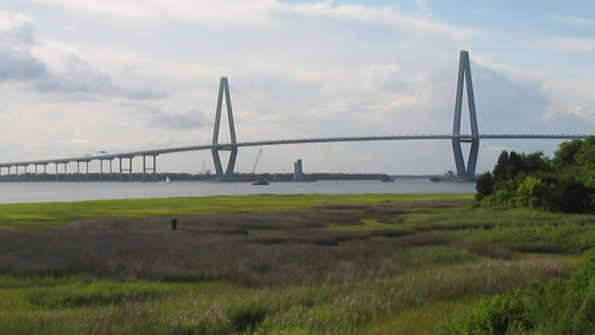 The Bridge to Peace Unity Chain demonstration took place across the Arthur Ravenel Bridge Sunday night, with strangers meeting in the middle of the bridge, embracing one another, singing hymns and cheering the phrase, ‘Charleston Strong,’ according to The Post & Courier.

Charleston and Mount Pleasant police departments helped staff the event. Police officials estimated that between 10,000 and 15,000 were in attendance, according to the paper.

Attendants, who stretched across the bridge as well as the nearby Mount Pleasant Memorial Waterfront Park, sought to show the city’s solidarity despite what Charleston Police Chief Greg Mullen referred to as a hate crime occurring at one of the city’s historically black churches.

Dylann Roof, 21, has been charged in the murders of the victims, who ranged in age from 26 to 87.

“This is a tragedy that no community should have to experience,” Mullen told The Wall Street Journal. “It is senseless, unfathomable.”

According to The Post & Courier, marchers, including comedian Stephen Colbert, were asked not only to rally on Ravenel Bridge but also take nine minutes – in honor of each victim – to think of how they could change someone else’s life.

The city itself responded to the racially-charged killings with love not violence, Charleston Mayor Joseph Riley told The Guardian. Riley has led the city of Charleston since 1975. The peace rally and the response from residents of all background showed that

Charleston’s black community “had reason to know they were respected,” he said.

“In Charleston and in America, do we have more work to do to understand each other? The answer is, yes, of course,” Riley told The Guardian.