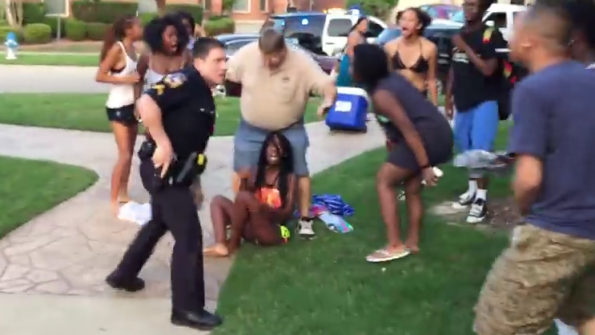 An inflammatory video of a police officer responding to an altercation at a suburban pool party has once again sparked debate over police relations and systemic racism.

McKinney, Texas, Police Cpl. Eric Casebolt has voluntarily resigned pending an investigation into his behavior during a recent incident.

The officer was at the center of a controversial video, which depicted him forcefully handcuffing a young woman and pointing his gun at a group of unarmed teenagers at a pool party last weekend.

“As the video shows, he was out of control during the incident,” Conley added. “I had 12 officers on the scene, and 11 of them performed according to their training.”

The video starts with Casebolt racing to the scene, where officers had already arrived to handle an altercation that broke out between party goers and neighborhood residents.

The sticking point for many is when Casebolt throws a young woman to the ground and pulls out his weapon, pointing it at the crowd of onlookers (altercation begins at 2:50 on the counter). Watch the video in its entirety below. (Warning: This video contains graphic language and violence.)

The McKinney police department’s investigation into the incident has concluded, as Casebolt is no longer an employee, according to the Associated Press. However a decision has yet to be made regarding the possibility of criminal charges.

Similar to recent incidents in Baltimore and Ferguson, Mo., two conflicting narratives have emerged around the McKinney incident, The Washington Post reports. One side argues the video is a clear example of excessive use of force against minorities, and the other side says race played no part in the incident – that the video only depicts an officer struggling to control a volatile situation.

What do you think? Answer in the comments section below.