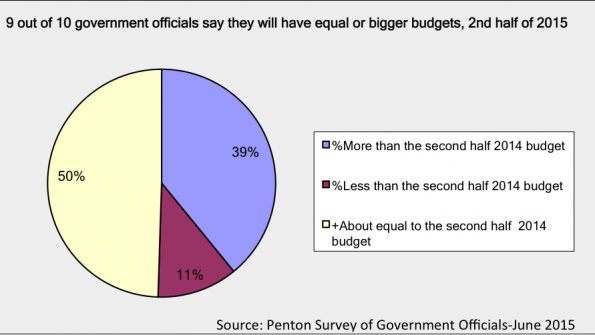 Government officials say fiscal conditions are improving. We base this conclusion on an exclusive E-survey of readers of Penton magazines Government Product News and American City & County.

Budgets are looking better as the second half of 2015 starts, say local government officials. They see healthier budgets and spending that is growing a little. More than four out of five administrators (88.6 percent) see their government’s budgets in the second half of 2015 equal to or greater than second half 2014 budgets, according to an exclusive E-survey of readers of Penton magazines Government Product News and American City & County. This year’s budget optimism outlook measure is a couple of percentage points higher than what our readers told us in the mid-year 2014 E-survey.

A total of 307 city/county, state and federal officials answered the question about mid-year 2015 budget trends. About 91 percent of the survey respondents are city or county government officials.

GPN reached out to local governments to find out how municipal budgets are trending as we start the second half of 2015. The economy in New Bedford Mass., is slowly improving, says Mayor Jon Mitchell (photo to the right). “New Bedford’s economy is gaining momentum, with the city’s major businesses adding jobs and our unemployment rate continuing to decline. We are seeing

significant growth in cargo handling in our port, and our commercial fishing industry remains the most profitable in the U.S.”
The mayor notes, however that New Bedford’s economic growth is only just beginning to result in significant appreciation in property values and growth in city revenue sources. That slow growth, says the New Bedford mayor, “will constrain the city’s budget until this dynamic changes.”

As the second half of 2015 starts, Allentown, Pa., Mayor Ed Pawlowski (photo below on left) tells GPN: “Our one of a kind Neighborhood Improvement Zone has created a billion dollars in new or planned development downtown and jobs are flowing into the city. A concession lease of our water and sewer utility system has stabilized the city budget. That is cause for great optimism.

The mayor tells GPN, however, that he is keeping a sharp eye on events in Harrisburg and Washington, D.C. “The battle over the state budget is expected to have tremendous impact on the school district budget which is a huge concern for city taxpayers. In my

discussions with my colleagues across the country, needed infrastructure improvements are always a part of the conversation and that requires a long-term funding partnership with the federal government.”

Federal government purchases of goods and services have remained steady, say IHS Global Insight forecasters. Uncle Sam is on target to spend the following on goods and services, according to new IHS estimates: