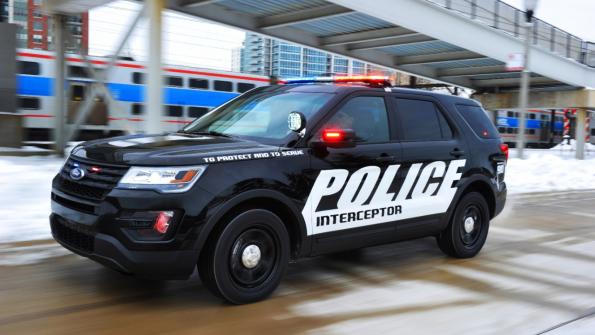 This summer, the 2016 Ford Police Interceptor law enforcement vehicle will hit the streets with a fresh look and new features.

The 2016 Ford Police Interceptor law enforcement vehicle is ready to hit the streets with a fresh look and new features this summer. According to Ford, the model is the only Pursuit-Rated midsize utility vehicle.

The 2016 model features a new front and rear design, new headlamps, a new instrument panel and an enhanced electrical system to distribute electrical loads. Available Surveillance Mode technology warns the driver when someone approaches the rear of the vehicle. Upon detection, the driver’s window automatically raises and all doors lock.

The company added a liftgate release switch, accessible to occupants in the front. It allows the rear liftgate mechanism to remain unlocked for 45 seconds before timing out, permitting officers to access the cargo area. A rear camera with washer is standard for the 2016 model with a 4-inch screen in the center stack (pictured below on the right). As an option, the view from the camera can be seen in the rearview mirror.

The design of the model allows agencies to choose from up to 25 different lighting patterns. The lights are integrated into the new front and rear fascia, allowing for a seamless design and a stealthy look for patrol duty. 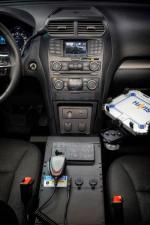 The model comes standard with a 3.7-liter V6 producing 304 horsepower and 279 pound-feet of torque, while an available 3.5-liter EcoBoost V6 makes 365 horsepower and 350 pound-feet of torque, allowing agencies to select the engine that best meets their patrol requirements. Both engines have been calibrated to meet test requirements defined by the Michigan State Police and Los Angeles County Sheriff’s Department. The vehicle’s standard all-wheel drive is designed to deliver low-speed traction and high-speed handling and stability.

The Ford Police Advisory Board offered input on the design of the 2016 model. The board, created in 2000, consists of a rotating panel of 25 experts from the law enforcement community. The group has served as a pilot group for products, programs and services.

The first Police Interceptor Utility was introduced in 2012. According to the company, the vehicle has helped Ford capture 55 percent of the U.S. law enforcement vehicle market. The vehicle is built Ford’s Chicago Assembly Plant.

The video shows the 2016 Ford Police Interceptor Utility on the road and how the vehicle is built.