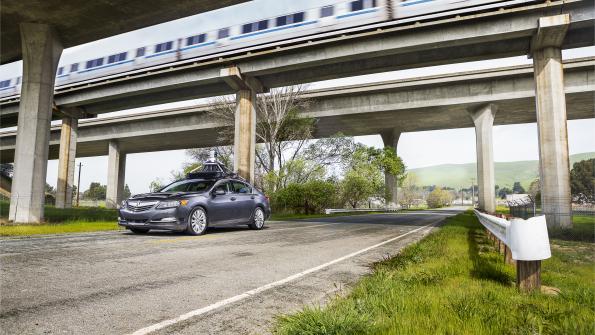 Communities are getting ahead of the driverless curve.

In March, engineers from Delphi Automotive set out to drive from San Francisco to New York City. The catch? No one would be driving the car.

The group’s Audi SUV was outfitted with an array of sensors and computers allowing the vehicle to drive itself. While it may sound like science fiction, industry leaders say this future is rapidly approaching. However, despite this inevitability, many cities and counties are not yet considering how autonomous vehicles will benefit them.

“In five years, 50 percent of the things you do as a driver will be eliminated by technology.”
That’s according to Randy Iwasaki, executive director of California’s Contra Costa (county) Transportation Authority (CCTA). That’s why he is working to stay ahead of the autonomous vehicle curve.

Iwasaki calls his region the “hub of innovation for automated vehicles,” as much of the technology behind the trend is currently being developed in nearby Silicon Valley.  He says researchers and engineers there are working on the world’s next generation of mobility, and the county is doing its best to facilitate this.

On March 31, CCTA and industry leaders came together for the Redefining Mobility Summit in Concord, Calif., to discuss the future of connected and autonomous vehicle technologies. There, the GoMentum Station project was unveiled.

“We’ve created the largest secure autonomous vehicle test bed in the United States,” Iwasaki says. “It’s strategically located 38 miles north of the Silicon Valley, and about an hour to the west of Sacramento where all the [state’s] regulations are going to develop.”

He says the facility will provide a location for auto manufacturers and engineers to develop autonomous and connected vehicle technologies. With approximately 2,100 acres for testing, the facility provides a secure location for prototype vehicles to operate in real-world conditions.

Converted from a now-obsolete military base, Iwasaki says the facility offers 20 miles of roadway for vehicles to navigate.

Not only will the facility provide a location to test new technologies, but Iwasaki says it will also help create jobs by attracting automotive and tech companies to the region.

So far, Mercedes and Honda have announced they will be partnering with GoMentum Station, and Iwasaki says the insurance industry has also expressed interest in the program.

While Contra Costa County is at the forefront of the driverless vehicle revolution, Iwasaki says the majority of the nation is quickly falling behind.

“A lot of times what happens is the cities and the counties… are developing long-range [transportation] plans, but they are always using today’s technology,” he says. “The 20 top MPOs (metropolitan planning organizations) in the nation haven’t addressed autonomous vehicles and their impact on mobility in the future.”

But one region, Greenville County, S.C., is already thinking how autonomous vehicles can benefit them.

“Greenville County is interested in promoting economic development,” says County Councilman Fred Payne. “We believe that automated transport network systems are an innovation that will attract riders and economic development, and address many urban mobility problems in Greenville, across America and around the world.”

What Payne is referring to is his proposal to build a network of driverless “podcars” in Greenville County to help propel his rapidly growing region into the future.

There are only five such systems in the world, but where they operate, they have proven to be effective. “It’s like a taxi on a monorail,” Payne explains, “or like a horizontal elevator.” Residents call for a vehicle to meet them at a station, select their destination, and are then shuttled there swiftly.

These systems complement traditional forms of public transit as they offer shared, lower-cost travel solutions, Payne says. Unlike buses or trains, which are often packed with strangers and stop every few blocks, podcars are more personal, on-demand, and go directly from origin to destination.

The Greenville County Economic Development Corporation, a non-profit county-created entity Payne chairs, has issued an RFP for the construction of the system. Four contractors qualified to submit a proposal for building the initial 20-mile network. Payne says the system will be privately financed and will not add any additional burden to taxpayers, and estimates construction could begin within a year.

Beyond boosting connectivity and alleviating traffic congestion, these networks are really a means to an end, Payne says – the end being the development of what he calls “GreenVillages.”  “These are sustainable, livable, walkable communities that are connected,” he says.

For decades, city planners tried to segregate different kinds of activities – where people lived was not where they worked, nor was it where they went for recreation. “When we did that, we created a transportation problem,” Payne says.

GreenVillage communities, he says, do the opposite. They are places where residents reside, work, dine, play and shop. And perhaps, most importantly, they have multi-modal connections to nearby neighborhoods with different attractions.

Payne says this connectivity is critically important in attracting the next generation of urban dwellers. Greenville’s automated transport network, he says will be a big step in achieving this goal.

Florida Leaders are Facing the Future

Florida views itself as being at the forefront of autonomous vehicle development, according to Florida Department of Transportation District 7 Secretary Paul Steinman.

“From the DOT perspective, we view ourselves as the national leader,” Steinman says. There are two major reasons for this, he says. Florida has some of the best-rated infrastructure in the country, and the state legislature has passed several laws allowing for driverless technology testing.

But it’s not just facilitating testing that puts Florida on automation’s main stage. The state has become a think tank for automation’s key players, and holds annual conferences to discuss issues regarding driverless technologies.

“Right now, there really is no exact answer to the question ‘What should we be doing [to prepare],’” Steinman says. “That’s exactly why Florida DOT, back in 2013, started our annual automated vehicle conference. We’re trying to start that conversation nationally.”

One thing is for sure, driverless technologies will affect transportation infrastructure. Lane width, striping and pavement practices will all likely change, Steinman says. Parking structures will be re-thought and much of the signage along roadways will be eliminated. Exactly how this will play out is yet to be determined, but Steinman encourages local leaders to be thinking proactively about it now, rather than scrambling as driverless cars hit the roads en masse.

A less obvious concern cities and counties will have to address, Steinman says, is cyber security. As autonomous vehicles emerge, so too will the concept of the connected vehicle, or vehicles that are able to communicate wirelessly with one another and their surrounding infrastructure.

“We need dedicated frequencies [for this],” Steinman says. “When that data needs to go back and forth, it needs to be instantaneous. You can’t have that little blue [loading] circle on your screen.”

While Steinman sees this driverless future as inevitable, he feels the social acceptance of driverless vehicles will be a major hindrance to the technology’s growth. For every commuter who wants to hop in a driverless car tomorrow, there are an equal number of drivers who swear they will never get in a car controlled by a computer. Slowly though, he says, perceptions are changing.

“This is the future of transportation,” he says. “The autonomous vehicle is going to be the biggest change in transportation since the United States put the Interstates down.”

Steinman says Florida will be at the forefront of this revolution. Last year the Automated Vehicle Conference had roughly 350 attendees from 22 states and nine countries. Government entities, auto manufacturers, engineers as well as key players in the insurance industry all attended the event. The next conference will be held in Jacksonville, Fla., on Dec. 1 and 2.